"Wedding in a Cemetery in a Zoo!"

Ok, you go to a zoo to see animals (sometimes botantical gardens); but at our recent visit to the Louisville Zoo, we found a nice little cemetery, too! Later, as we passed the area of the zoo with the cemetery, we observed the photo session of a wedding party after the vows were repeated... where? in the cemetery in the zoo! Click on photos for a larger image. 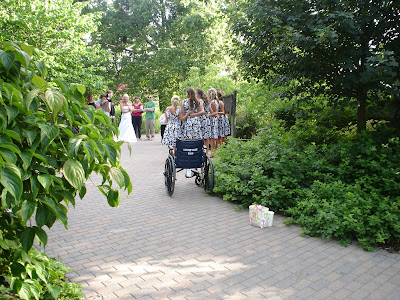 Above is the wedding party bridesmaids getting their photo taken. We noticed that the ladies had very nice black & white floral design sun dresses, bright yellow high-heeled shoes with matching yellow necklaces & earrings. The groomsmen wore black tuxedos with yellow handkerchiefs and ties. 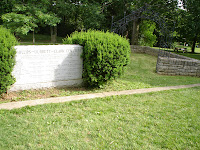 Here is the cemetery in the zoo that the wedding took place. This confirms the new wave or trend to get married in cemeteries as this blog recently reported. We posted a blog on here about the cemetery with a few more photos. 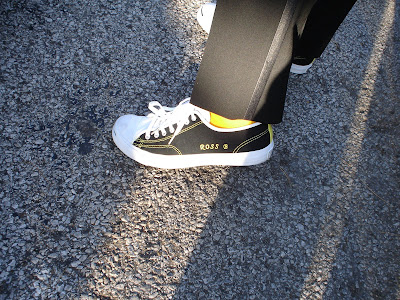 On our way out of the zoo, we came upon some of the groomsmen and commented on the wedding, they pointed out that they all wore yellow socks and yellow personalized monogramed tennis shoes. Ross let me take a photo of his shoes. My thought is that this was a really neat wedding with a creative young couple starting a fresh life together.


-Photos taken & submitted by JGWest
Posted by TSGS at 7:34 AM No comments:

The Library of Congress hosts a collection of more than 2,000 interviews & 500 images of former slaves. These interviews were collected from the 20s - 40s and help preserve the memories of what life was like for many in slavery. The interviews are available online at http://memory.loc.gov/ammem/snhtml/snhome.html.

From time to time, I like to search the collections for relevant information, in hopes of locating information on what life may have been like for my own ancestors. To date, I've found one story, that of a slave named Will of the Battle family of Edgecombe County, NC that particularly resonated with me since I had ancestors that were also owned by the same family. (see my blog post at http://is.gd/R2iF).

When searching the collection for Evansville-related stories, there are several that come up. Among those interviewed from Evansville include:

Now, I was all prepared to highlight one or two of these interviews and provide additional data as I could gather from additional research, but when I saw the name George Fortman on the list I was floored. Why? Because I think this is the ancestor of my mother-in-law's sister! This particular sister has a different father than she (we'll call the sister, J) and J has a grandfather named George Washington Fortman Jr. On my family tree site, I have a profile of him that is linked to some data sources, such as census records. (at http://is.gd/Reax).

So, when I go to read George Fortman's interview, the details of his life as he provides them are amazing. He is describing his ancestors and this Native American heritage. He is white plus Native American; the son of a white slave owner and his Native American slave. Even more astonishing to me is that he tells that he was named Ford George after his white father (James Ford George). The interviewer asked him if that is the case, why does he go by Fortsman? To this George replied that when the census taker came, the wife of his father told the census taker the true nature of George's birth and that she was raising George, but the census taker
convinced them to put down George Fordsman and switch it around.


To add to this: the interview provides George Fortman's address and this address is VERY near where J's George Ford was living in 1930. I found a George Ford in the 1920 census that is of similar age to J's George Ford, and he is listed as having the occupation of janitor at a business college. Guess what the interviewee George Fortsman did for 11 years? "Janitored" at Lockyear Business College! J's George Ford in 1930 is enumerated as a janitor at a church. J's George Ford was born around 1850-1855 in Kentucky. The interviewee George was born around this time in Kentucky as in the interview it is noted that he was too young to participate in the Civil War. J's grandfather, George Fortman Jr., lived in Illinois and many of his children, including J's father, were born there. George Fordsman the interviewee was employed by the Illinois Central Railroad Company. The interview states that George Fortsman was a 35 year resident of Evansville. The 1922 Evansville City directory does not contain any Fortsmans. But, there are two George Fords (that are noted as colored) and one is a janitor. There are some spelling issues in George Fortsman's interview, but I have located his white family based on information in the interview. The "Patent Ford" he speaks of was actually William Patton George (1768-1837). He said Patent's wife was Hester Lam, but her maiden name was actually Lamb. George states that their son, Ford George, was his father and that his father had married a woman named Lorraine. In the 1850 census, I found William P George & Hester George in Caldwell County, Kentucky (location consistent with George's interview) and in their household are 25 year old James F. George and 26 year old wife Luraine. I even found a picture on Ancestry that is labelled as possibly being William Patton George and son James Ford George (http://is.gd/RgU9).

So, I'm trying to figure this all out! Is this all coincidence or is J's George Ford the same as the interviewee George Fortsman? From what I've found so far, I'm starting to think it is, but I definitely need to gather more information.

This is why it pays to revisit sites regularly!
- Submitted by Taneya Koonce
Posted by TSGS at 9:12 AM No comments: 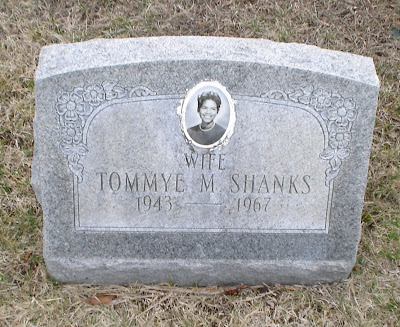 Tommye M. Shanks
According to the Browning Database of obituaries, Tommye was the daughter of the Rev. & Mrs. T.O. Haskins and her Grandmother was Willa Haskins of Hopkinsville, KY. Tommye was a Bosse High School graduate. Her husband was Andrew Shanks (married for 5 years). 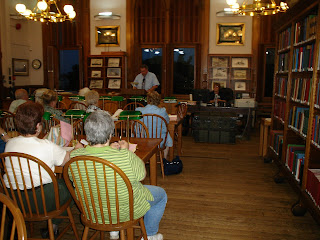 TSGS President John G. West conducting the last meeting of the 2008-2009 Fiscal Year. To the right (seated behind desk) is TSGS Secretary Lyn Martin. The 2009-2010 Proposed Budget was approved by the members. Also, the TSGS members voted to donate $50 as a "Gift Of Appreciation" to the Willard Library Staff Association for their service and dedication to the public genealogical community and TSGS members. 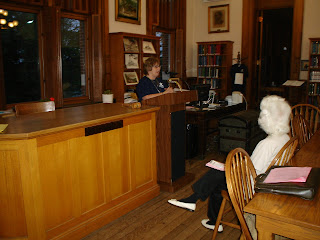 The program for this meeting was presented by Willard Library's
Special Collection Director Lyn Martin.
-Photos taken by Kenneth Gilkey and submitted by JGWest
Posted by TSGS at 7:33 AM No comments:

Cemetery inside the Louisville Zoo!
Marker of Jenkins Phillips 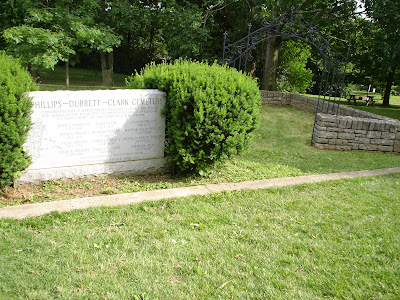 Phillips/Durrett/Clark Cemetery inside the Louisville Zoo 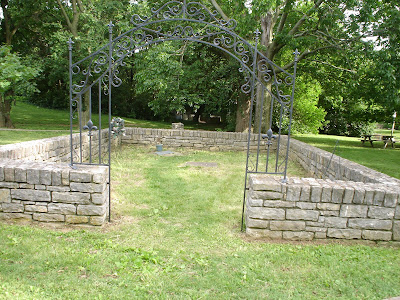 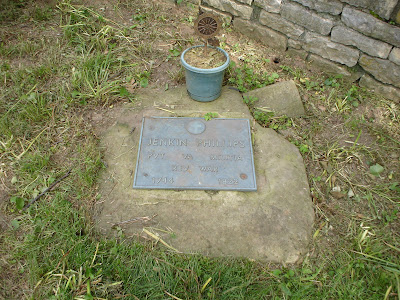 - Photos taken & submitted by JGWest
Posted by TSGS at 4:06 AM No comments:

Reminder that we have a TSGS Meeting Tuesday night (June 9) at Willard Library. there will not be a 6:30PM Help Session for this meeting. We will conduct the installation of the newly elected officers and we will vote on the 2009-2010 TSGS Budget. Keep in mind that we will not have Monthly meetings in July & August.

Our cool ClustrMaps Counter shows that our Regular TSGS Web Site has been visited by people from 31 countries with the USA now registering just over 2000 unique visits with Canada (10), United Kingdom (11) and Ireland (26) showing 10 or more unique visits. We have 13 countries with 2 or more visits. In the USA, our site has been visited by someone in each state except Maine & West Virginia. I am surprised that no one from West Virginia has not visited us since Dec. 14, 2008 when I started the ClustrMaps Counter.