From My Email Box - "The Hart Island Project"

Karin Marie Kirsch, a former TSGS President...
sent me this link http://www.hartisland.net/ about

The Hart Island Project
[Below is the introduction on the web site]
Welcome to the Hart Island Project, an interdisciplinary artist and community collaboration. Please register to search the database and to access the film, posthumous blog and burial records. You are invited to participate in relocating a diverse, international community of people who died in New York City.
The City Cemetery occupies 101 acres in the Long Island Sound on the eastern edge of New York City. It is the largest tax funded cemetery in the world. Prison labor is used to perform the mass burials that now number over 850,000. Relatives must enter the prison system to visit the grave of a baby. There is no map of the burials and no one is permitted to visit a specific grave. The Department of Correction restricts visitation to those who can document the burial of a family member buried on Hart Island. Records at this location consist of intact mass graves since 1985.
The mission of the Hart Island Project is to make the largest cemetery in the United States visible and accessible so that no one is omitted from history. The process of reclaiming the identities of those buried is a global, community effort. A system has been created for volunteers to enter data from pages acquired through Freedom of Information Law. Older records are available at the Municipal Archives. A FOIL request for records from the 1970s was submitted in January 2010.
Registered visitors to this site may search the expanding database and submit stories, poetry, images and links to this emerging image of a global community.
Posted by TSGS at 11:48 AM No comments: 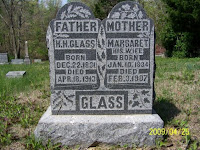 Too many plug-ins and not enough easy ways to know where it all goes. Some computers have everything color coded, but if you get something new... it will not have the nice matching color scheme. I discovered a simple method to help me figure out just what hooks into where! I take several photos with my handy digital camera, download them to my computer, check that all details are clear enough for me to know where everything goes (take a few more photos, if needed), then print them out (this part is important since you will have everything disconnected on the computer & will not be able to see your photos)... make sure the prints are clear enough to see where things go together! Below are a few photos to give you the idea of how it can be done. 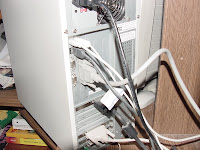 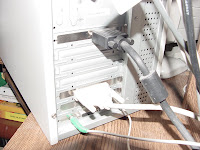 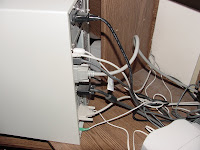 '
1966 Polaroid Photos!
I found these old "Swinger" Polaroid B&W photos in a little tin index card file box as we were moving things into our new storage barn. This box was in my room in Mom & Dad's house on East Indiana Street. My last year in 4-H was 1966... we had moved from our "farm" in Warrick County between Heilman & Tennyson, Indiana close to the old Loafer Station crossroads to Boonville to graduate from BHS in 1965 (we are having 45th. Reunion this summer) and then to Evansville. Mom was so glad to get back to her beloved Evansville! The move to Indiana Street was close enough for me to walk over to Evansville College (now University of Evansville). I left the Loafer Station 4-H Club when we moved to Boonville and joined the Thorny Grove 4-H Club in Chandler, Indiana (still Warrick County). In 1966 I was President of the Thorny Grove club and very active in Warrick County 4-H. The little tin box held instructions on playing games and dances for the 4-H Recreation Project for the 1966 County Fair. I held a Kids Neighborhood Party at our house and had someone take these Polaroid shots (probably Mom). These Swinger Polaroid photos never were of very good quality, but were adequate. I am positive that it has been 43.5 years since I have seen these photos... I strongly suspect that the box was put back somewhere in my old room right after the fair not to be seen until this past Sunday!

My sister, Tina, & I demonstrating one of the dances for the party. 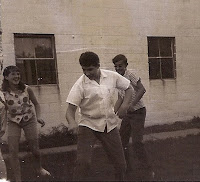 This photo was not taken during the party, it was taken at the Christmas home in Chandler with the block building being our meeting place. Here I am showing kids of the 4-H Club how to be really "goofy" while dancing. We had fun and that was what it was all about. Wow! Young, thin & energetic! 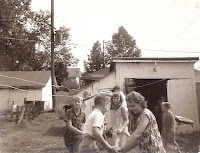 Back at the party at our house. In the foreground is Keith Gibson dancing with Faye Gibson from two doors down. Next facing us is my little brother Don dancing with Debbie Conover. Then you can barely see Tina and me. [See the old wooden garage behind us, lightening hit it one night & it quickly burned to the ground.]

Above is most of the kids that came to the party. In the back from left is my sister Tina, Faye Gibson, Me, Keith Gibson, Debbie Conover, my brother Don. Cheryl Conover, Clifford Gibson. Butch Conover next to Wanda Gibson.

'
A Tale About A Five-Year-Old Witch Child...
that appears to be false! 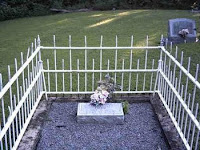 Here is the story as it is told on The Shadowlands website:
http://www.theshadowlands.net/places/kentucky.htm

Marion [Kentucky] - Pilot's Knobb - Witches Grave - This cemetery is
located off of Ford's Ferry Road in Marion. The legend behind this
cemetery is about a five year old girl who was burned at the stake,
along with her mother, in the late 1800's to the early 1900's for
witchcraft. It is not known what happened to the body of the mother,
however the little girl, Mary Evelyn, is buried in a steel lined grave
that is covered with rock and not dirt. She has a white picket fence
surrounding her grave. The base of this fence is a series of crosses
that connect end to end. However she is not tall enough to climb over
the fence, unlike a normal 5 year old. Her tombstone looks brand new
even though it is close to 100 years old, as does the fence. She paces
inside this fence when someone comes to visit her making faces at them
and reaching out to them. She sleeps during the day but is very evident
at night. The legend also says that she can not rest because she is
searching for her mother but can not escape the confines of the fence.
Many unexplainable things occur at this cemetery. For one the "Watcher"
makes himself very know and tries to follow you out of the cemetery.
The "Watcher" was murdered at the swinging bridge but haunts the
witch's grave. He is trying to get to the little witch but because of
the crosses that surround her he is unable to because he is evil.
Crosses appear in the trees both upright and upside down, directly over
her grave, though they face different directions. She presents herself
as a normal 5-year-old little girl in a white dress, though her dress
is scorched at the bottom as is her blonde hair. If you lay on her
grave she will hold you down refusing to let go until someone from
outside of the fence pulls you free. However never lay on the grave
when you are alone because chances are you will be pulled into her
grave to be with her thus giving her more power. As with every haunted
cemetery people that are open to the spirit world sees something different.
Another account & an actual reported visit to the cemetery during daytime & then later at night by The Louisville Ghost Hunters Society:
http://www.louisvilleghs.com/LGHS_MASTER/SUB/Legends/Pilots%20Knob/pilots_knob.htm
Certainly interesting stories, but then along comes a genealogical researcher... look at what she says and found out!!!
"After learning about this story and the websites from Bonnie, I decided to do some checking to see what I could find out about it. I wanted documented facts only. Below is what I found. Thanks Bonnie Gass for telling me about this." - Peggy Gilkey.
The Truth
Mary Evelyn Ford's Death Certificate shows that she was not burned as a witch but died from peritonitis ( inflammation of the stomach lining) and rec(t)al impaction. Also her mother Mary Rebecca (Davis) Ford was still living in the 1920 Crittenden Co., Ky. U.S. Federal Census: h/h 64/64 Ford's Ferry Dist., four years after the death of Mary Evelyn. Neither was burned for being a witch. Shame on the one that started this story about a "Little Witch Girl"
http://www.westernkyhistory.org/crittenden/pilotknobcem.html
Evelyn Ford's parents were James Andrew Ford b. 13 April 1857 d. 17 Sept. 1927 and Mary Rebecca Davis Ford b. 1869 d. 1955. (Burned as a witch, I think NOT!) They are buried by Evelyn and also a son Corbett C 1892-1970 and a dau. Cavey Busey 1897-1980. I imagine the only news story would have been an obit, but as you can see most of them lived a good long life. 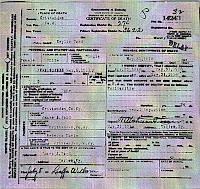 [The death Certificate is a little hard to read, but you can see that Evelyn Ford did not die from burns or even related to such cause. Why the story of "witchcraft" for the child & her mother remains a mystery. More research may unfold more facts to bring this "River Debris" into proper perspective... and this poor child's spirit will be able to finally Rest in Peace! - JGWest]

- Submitted by Peggy Gilkey
Posted by TSGS at 8:46 AM 1 comment:

Becky & I several months after we were married in 1969. This was taken in Evansville while on leave from Tinker Air Force Base in Oklahoma City. We were young, thin and had no children! 41 years later, Becky is still my Valentine!