Gilbert Schmitt sent me this:

Enjoying the blog. Here is something for it.

I went to Footnote to try out the free census deal for August. I don't belong to any paid genealogy sites but will try out their special offers. I wanted to look up my parents and step father and make some copies for mom.

My father showed right away but was living with someone called William Dietty and his wife that was illegible as the note said. Going to the census page and zooming in a few clicks I could see that it was transcribed wrong. The lines clearly state the name Deitz and the wife's name Wilhelmina was clear. Both became very good family friends while still alive. Also the transcribed estimated birth dates for dad were two years off.

Looking over the entire page, as other relatives lived near them, I found 14 transcription errors of the names from what was actually written compared to what notes were showing as the cursor moved over the lines. That's 14 errors on just one page. I had a lot of trouble in Henderson Co., KY for this same reason. In my opinion the 1930 census at Footnote.com is worthless. Gilbert

[Has anyone else experienced similar error problems with transcription of the 1930 Census on Footnote.com? - JGW]
Posted by TSGS at 1:24 AM No comments:

This is actually from our Treasurer ~ Bettie Cummings Cook:

The membership year runs from July 1 to June 30. Dues are $12.00 for an individual,
or a family, residing at the same address. Dues received after September 1st are $14.00
to cover the additional cost of having to mail back issues of the Packet separately.

New in the coming year - more area genealogical records in the Packet. Visit our
website http://www.rootsweb.ancestry.com/~intsgs/ and sign our Guestbook. View
our new TSGS Cruiser Blog http://tsgsblog.blogspot.com/ and become a Follower.
You’ll find tombstone photos, genealogical items, local history, and more. Submit
items and tell the world about your interests on our new Blog.

John G. West, TSGS President
Posted by TSGS at 8:02 AM No comments: 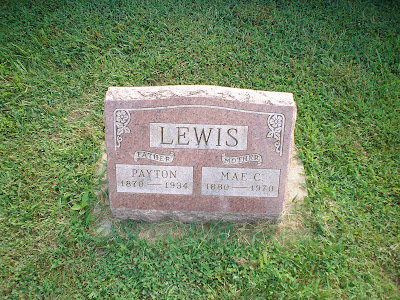 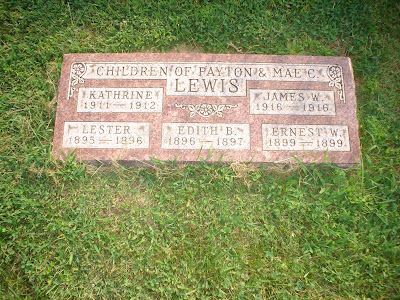 Payton & Mae Lewis is reported to have 12 children, five are remembered on one grave marker as dying in infancy.

I found two very special flags in McCoy Cemetery near Monroe City, Indiana (Knox County). They were left for the graves of Walter S. McCoy and his wife Garnett A. ~ he died in 1982 aged at 76 and she died in 2000 aged at 90. The small flags are embroidered/stitched... one for each: "Father" & "Mother." Behind each flag is a bouquet of beautiful artificial flowers.

This couple was married for 54 years when Walter died. 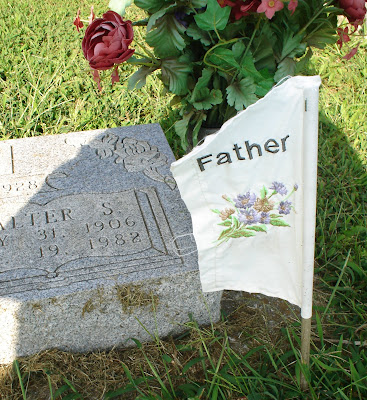 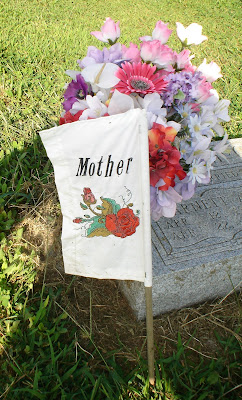 A visit from a blog contributor from Nashville...

Taneya Koonce came to Willard Library to meet me & Brenda Jerome on Sunday 09 Aug 2009. Brenda along with Taneya, Don Counts & Chris Myers are the major contributors to our TSGS Cruiser Blog. Below is a photo of us in Willard's Special Collection floor. 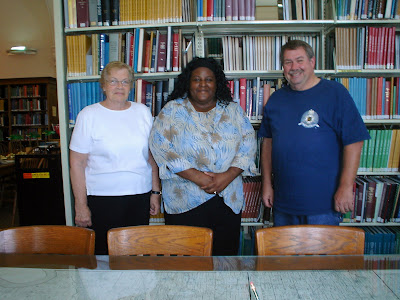 Left to right: Brenda Jerome, Taneya Koonce and John G. West.
We had a very nice visit that we cut short because Taneya is a genealogist (just like us) that wanted to do some research in Willard's fantastic genealogical collection. Taneya is a very nice young lady with five young children: four boys and the cutest little girl that I have a photo on this blog on an earlier date. She has promised me that she will submit for the blog the interesting story behind her name and another lady plus her sons' names.
Posted by TSGS at 1:36 AM No comments:

This is a follow-up of yesterday's blog with two plaques... one is a little mystery, that we can use some help! - JGW

In yesterday's blog, we had photos of the U of E beautiful grounds & gardens. On the Lincoln Avenue side of the campus, you can see the Administration Building and a nice stone sign "University of Evansville." The sign is actually the back side of a large bench like platform for visiting or small events like a musical performance or a political rally that occured there in the late 1960's with Eugene McCarthy.

The plaque below was installed on the bench during the University's 150 years of preparing leaders for tomorrow. The "Sesquicentennial Oval" was made possible through an estate gift from Dallas Bower-Suhrheinrich, long-time UE Trustee. 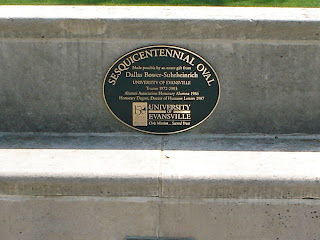 Below that plaque is a somewhat older plaque (in photo below). The qulaity of this photo is not very good and I apologize for it, but I did want to include it today. It is a little mystery as to who this man is and why this structure was dedicated to his memory, in addition to when was it dedicated. The small plaque simply states: "Dedicated to the Memory of Michael E. Thorp."
I checked the newspaper clippings and obituaries in the Browning Databases and I checked the online databases for both city cemeteries. I also went to the U of E's website hoping to find something there. I found nothing. Maybe one of you bloggers out there can find out who Mr. Thorp is and why this centerpiece in the gardens at UE was dedicated to his memory and when it was dedicated. 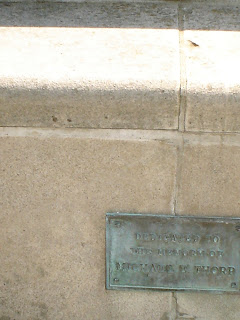 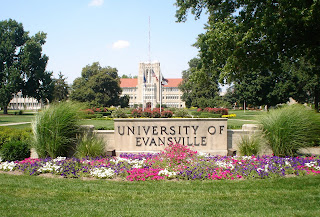 Yesterday, while driving along Lincoln Avenue east toward Weinbach Avenue, I glanced over at U of E where I attended part of my college years over forty years ago. The grounds were so pretty in front of the Administration Building that I was compelled to come back later with my camera to take a few photos. It was a beautiful day and the garden & grounds made it even better. I guess that the gardens have been enhanced over the last few years or I just simply did not notice before. I came to the, then, Evansville College in 1965 after graduating from Boonville High School. What an exciting time in my life! I was the first in my immediate family to go to college; however, my mother's first cousin, Betty Wood, attended Evansville College graduating with honors in 1950. I think it was 1967 when they changed the status of the college to a university, while I was a student there - that was very exciting, too. We were required to take Air Force ROTC for two years and assembled on a regular basis in the more spacious plaza in front of the Admin. Bldg. - it was not the garden it is today. Right behind or actually the other side of the stone sign is a small platform or stage that was used for various events. I remember attending an event there when Eugene McCarthy spoke from this platform to the U of E students in is bid for the U.S. Presidency. 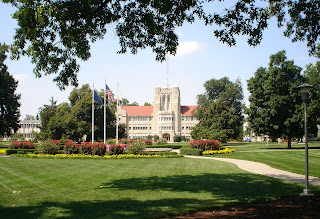 Another view of Admin. Bldg. with the flag poles and circular garden. The grandeur of the building coupled with the trees, flags, flowers & grassy plaza makes for a very pleasant scene. 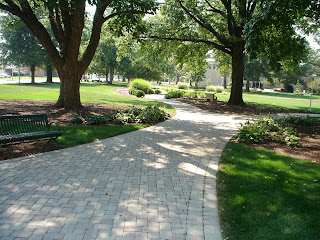 I do not know when the University added the cobble stoned walkways, but it really enhances the whole garden & grounds. There are a lot of changes at U of E over just the last few years... several new buildings and expansions of existing buildings. I ended up graduating after four years in the U.S. Air Force from Indiana State University - Evansville (ISUE) [they changed their name, too - University of Southern Indiana]. USI has a great campus with beautiful grounds, as well; however, there is something extra special about U of E that will remain in my heart forever!
- Photos taken & submitted by JGWest