From the Minnesota Public Radio web site:
MOORHEAD, Minn. — The last time anyone was buried in the Boerner family cemetery in Grant County was in 1892. For about 20 years before that, it was where early settlers laid at least 10 family members to rest. A small grove of trees at the cemetery was gone. When investigators got a search warrant they found evidence of what Minnesota's state archeologist says is a growing concern, the destruction after years of abandonment of one of the state's thousands of small cemeteries.  The farmer whose field included the cemetery acknowledged clearing the cemetery... damaging a cemetery can be a felony under Minnesota law even if it's abandoned. Even though the farmer owns the land, the cemetery is protected. 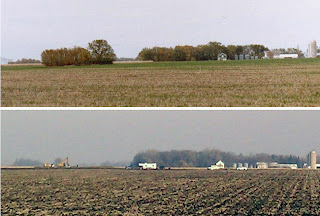 Top left cluster of trees has been removed in the lower photo... the Boerner Cemetery WAS in those trees!
Photo below are photos of grave markers that were in this cemetery!!! 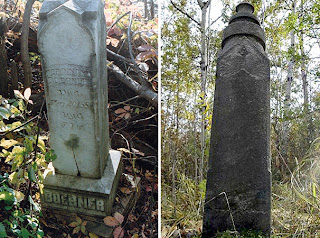 Read more about this shameful act of disregard of human dignity and respect:

TSGS Cruiser Blog reported this article from the Eastman's Online Genealogy Newsletter (EOGN).
Posted by TSGS at 12:11 PM No comments: