"A part-time Census Bureau field worker was found hanged in Kentucky 12 Sep 2009 with the word "fed" scrawled across his chest, according to a law enforcement source. Bill Sparkman, 51, was found at the Daniel Boone National Forest in rural southeast Kentucky."

Recently, his death has been reported as a suicide that was perpetrated as a murder to ensure that the insurance proceeds would be paid.

"The Kentucky census worker found hanging from a tree with the word 'fed' scrawled on his chest staged his death to look like a homicide so that his son could collect his life insurance, the authorities said Tuesday. 'We believe this was an intentional act,' said Trooper Don Trosper, a Kentucky State Police spokesman. 'We believe the aim was to take his own life.' ”

It, now, appears that it is not a "murderer" of a Census Taker that is "river debris" that deserves to be in the TSGS Dock of Shame, but, rather, the Census Taker himself... Bill Sparkman.

- Compiled by JGWest
Posted by TSGS at 7:55 AM No comments:

“For My Sister, Tina”

.
This is the first edition of a new feature that I am calling “For My Sister, Tina.” It will be labeled for the right side index as "For Tina." One of the missions of the TSGS Cruiser Blog in addition to news of the society & genealogy is little tidbits or glimpses of the tri-state area for our members, friends & family that live away from the Evansville area. Tina, my sister, moved to Charleston, SC almost 30 years ago near where our older brother Glen lives. Much has changed since 1980, here and everywhere. She has a subscription to the Evansville Courier & Press and she visits Evansville when she can, but even then things have vanished, changed or new things have been created that she does not know about.

She will send me ideas to report on for her... and I encourage everyone interested to submit ideas for me to report on the blog. This will not be a regular weekly feature like the “Monument Monday” or Wednesday's “First Mate's Photo Album” or “Tombstone Thursday,” but will be posted when I have something to report. Ideas could include: what is new, what is no longer, what has changed, what is special.

Please send me some ideas! John G. West, TSGS Blog Master
Posted by TSGS at 8:02 AM No comments:

From the Officers of the Tri-State Genealogical Society... 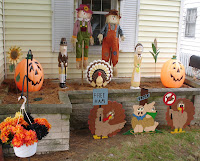 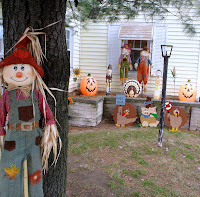 "From a Jewelry Store and a Hotel..."

From the past we save some elegance & beauty...

Evansville's Artes Jewelry Store & the Acme Hotel gave some of their greatest fixtures to the Evansville C.K. Newsome Community Center: a world award winning bar plus crystal chandeliers from around the world. From a newspaper story, I found this concerning the bar ~

Spirits of the Past
Ornate bars of Evansville are an elegant toast to the city's history
By SARA ANNE CORRIGAN Courier & Press correspondent
Posted December 5, 2007
Although not in use as a center for serving of alcoholic or other beverages anymore, there is a beautiful old canopied bar with beveled mirrors and massive carvings on the front columns installed in a banquet/meeting room at the C.K. Newsome Community Center on Walnut Street at Heidelbach Avenue. It is strikingly out of place in the contemporary structure that replaces an earlier community center at Eight and Main streets, which was razed to make way for the Civic Center Complex. That building had an earlier life as a CE&I Railroad depot; the columns that make up the centerpiece of the Four Freedoms monument on Evansville’s riverfront were also salvaged when that building was razed. But the bar, according to Dan Kollker, was moved there from an even older and long-since forgotten venue, the Acme Hotel, in Downtown Evansville. 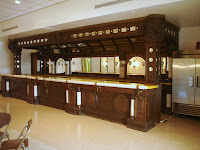 Here is the bar at the Community Center. Click on photos to enlarge images. 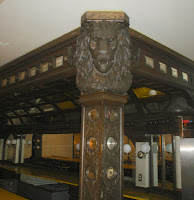 The east end corner column topped with a hand-carved lion's head with close-up below. 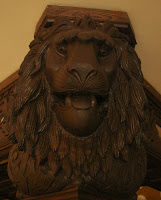 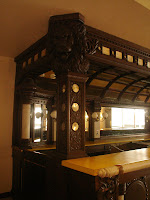 Here is the East corner of the bar showing the marble hand rail. 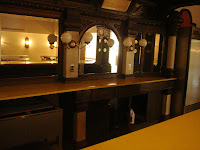 View of the back side of the bar. 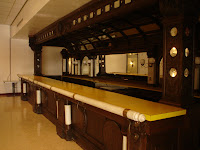 Close-up view of the bar. 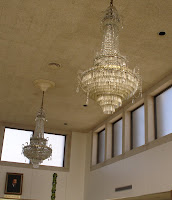 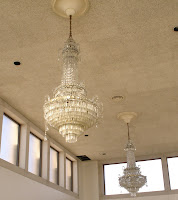 From other news accounts, I discovered the following ~
Built about 1866 at 22 NW 2nd. St. near the Old U.S. Custom House & Post Office building, the Acme Hotel stood on the Southwest side of 2nd. Street between Sycamore & Main. The hotel was closed 25 July 1956 & razed in August 1956. The hotel, once one of Evansville's finest, was known up & down the Ohio valley for its cuisine. One news report stated that travelers considered there was no finer place to eat on the river and no finer wine cellar. The bar room with its cut-glass crystal chandeliers became known as the Acme Crystal Room and for a few years considered Evansville's most popular beverage spot. The chandeliers were part of the original Artes jewelry store which had imported them from Czechoslovakia made for the Palace of Versailles. Each chandelier contains 1200 prisms and more than a score of light connections.
The old oaken relic bar with its beveled glass canopy (193 mirrors), is said to have won a prize at the Chicago World's Fair in 1893 as the finest bar on exhibit. Made in Italy, it features hand-carved lions heads at the top of each end. Twelve feet tall and thirty foot long, the bar has a marble hand rail and brass foot rail. The hotel was torn down & replaced by a hard-surfaced parking lot.

Yesterday, I posted the plaque dedicating the Evansville Community Center that was later re-named the C.K. Newsome Community Center after Dr. Newsome. While I was at the center taking the plaque photo, I took the below photo of Dr. Newsome that is up very high toward the top of the ceiling. It is a very nice painting. I could not read the name of the artist. I knew a little about him, but wanted to learn more. 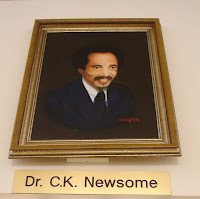 I found a great news interview of Dr. Newsome concerning Civil Rights in Evansville entitled "We're Still Outside" published in the Evansville Press 01 Mar 1969 that impressed me. Here is a condensed version of his obituary & a news article about his death.

Dr. Cola K. Newsome, civic leader, died on 27 Apr 1982 at the age of 55. He was the first black to serve on the Evansville-Vanderburgh School Board. Mayor Frank McDonald, Sr. appointed Dr. Newsome to the board in 1964 serving through 1971. During his tenure, he had been instrumental in the early planning for desegregation of the county's public schools. "With his many civic activities, Dr. Newsome maintained an active medical practice and for a number of years was the only black physician in Evansville. He and his wife, Gerdine, a nurse, worked together in his clinic at 415 E. Mulberry with a goal of introducing comprehensive and preventative health care for poor people in the neighborhood." Evansville Press (27 Apr 1982).

A native of North Carolina and veteran of World War II, Dr. Newsome came to Evansville in 1957 after graduating from Meharry Medical College in Nashville, TN. He received his bachelor's degree with honors from West Virginia State College in 1949 and his master's degree in 1952. His most recent project was as President of Beneficial Development Corp. - a group of black business entrepreneurs working to develop a neighborhood shopping center & housing in the inner-city area. Ira Neal a friend and partner in this venture said that Dr. Newsome was first & foremost a dedicated physician and a super person. He had a reputation as generally quiet and soft-spoken, but made his views known when called for.

He served on numerous other public boards, including boards of the Evansville Housing Authority, the Public Recreation Commission and the Southwestern Indiana Mental Health Center. He was a lay leader at New Hope Baptist Church. He was survived by his wife & five children.

.
C. K. Newsome Center...
(Originally called the Evansville Community Center)
Below is the building dedication plaque located at the entrance to the center in 1971. Click on photo to enlarge the image. 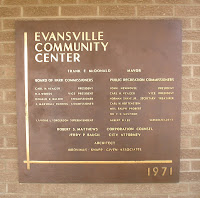 The Mayor was Frank McDonald, Sr. (his son, Frank, Jr. would serve as mayor later). About this time a new Mayor had been elected Russel Lloyd, Sr. (his son, Russel, Jr. would serve as mayor later, in fact, right after Frank McDonald, Jr.!!!). Of the Public Recreation Commissioners - Dr. C.K. Newsome was a member. Another member was Carl H. Hottenstein who (I believe) owned the American Dairy in Evansville and he would attend the Evansville SAR meetings as the guest of member Kenneth Alexander (who rarely made the meetings, because of his business: Alexander Funeral Homes).
The Board of Park Commissioners Vice President H.A. Woods owned the Woods Drug Stores in Evansville. Corporation Counsel was Robert S. Matthews (a great man), his son was one of my best friends, Rob Matthews.
- Photo taken & submitted by JGWest
Posted by TSGS at 7:21 AM No comments: