From My Email Box - "Patriotism”

NOTE: I equate patriotism & citizenship as qualities of a nation's culture; and, thereby, of significance to history; and, thus, of importance to genealogy. Below is a bipartisan email essay on inaugurations of our United States Presidents. - JGWest

I want to share a few thoughts of mine with you, as fellow patriots. On Tuesday we will all witness a historic event. Indeed, the first Black man becoming President of the United States is a momentous occasion in our country's history, but I will watch for another reason as well. Any man becoming President of the United States is a momentous occasion. I will be honest here, I did not vote for Mr. Obama. That was purely an ideological choice on my part. But I am not sorry he is President. He appears to be a good and earnest man, and I hope he serves the country well. I am proud that my nation -- so often divided by race -- could put that aside and show the world just how far this country has come. I wish only the best for the new President. He is not just "the" President. He is "my" President. He is "our" President. That doesn't mean we have to agree with him after he takes office. Dissent and debate are part of our history. There are Presidents I have not liked one bit and have even been disgusted with the way they acted in office. But they were still the President, and as a true patriot I would have gladly given my life to protect theirs and protect the office. One can be a patriot and still disagree, but in the end a patriot defends the sanctity of the nation.

I remember some inauguration from years past. Frankly, it could have been Reagan's or Bush 41's, or even Clinton's, I don't remember. But I will always remember what Peter Jennings, the commentator (and Canadian at that) for the station I was watching said. Shortly before the swearing in, he said, "What you are about to witness is the envy of the entire world. The free transfer of government." Those words have always stuck with me. And that is why I have always revered the swearing in of a President, regardless if I voted for that person or not. About 150 years ago there were a number of people who didn't like the results of the 1860 election, and as you know that election led to the secession of the South. Abraham Lincoln has been referenced much of late, and rightfully so. Lincoln ended slavery and saved the Union. But the subtlety of what he achieved is often lost, and is much deeper. It's about the nature of democracy. We as a nation cannot hold a popular election, and if some of us don't like the result choose to "opt out". Regardless of beliefs or ideology, we respect the outcome and acknowledge the leader of our nation. That, in my opinion, is Lincoln's greatest legacy. Many countries hold elections for presidents now. It isn't a novel thing anymore. But people who don't know history fail to realize that when polls opened in December 1788 it was a truly radical concept -- that a populace comprised of simple farmers, merchants and fishermen could actually govern themselves and choose who would be their leader. We often take that for granted today, but in the 18th-century it was unheard of. Yet, a group of men from an outpost of a great empire decided that they and their fellow citizens could decide their own destiny, and they were willing to give their lives for that ideal. And through their efforts they shook the foundation of world history.

We hold elections. We disagree. We fight. We argue. But in the end we acknowledge and accept the results. No palace coups. No bloody military takeovers. We respect our system of government and the system our forefathers in their infinite wisdom created. We swear in a new President. That is why I watch an Inauguration. That is why I am Patriot. That is what my ancestors fought for.

John has been after me to write an article for the blog -- so I will start with this one.

If you are not familiar with Eastman's Online Genealogy Newsletter you are missing out on some very worthwhile material. It is like reading a daily newspaper that is only about genealogy. It is FREE and people all over the world read it. No personal family history stuff, but happenings in the genealogy world, new products, etc. Just type EOGN in your search box and the current day's issue comes up. In today's issue (January 17 / 18) Dick Eastman's feature article is about an article written by Mary L. B. about PITFALLS. The view counter went from 157 night before last to 3,017 this afternoon. Click on EOGN FORUM to see the entire Forum. [See here: http://www.eogn.com/forum/index.php/board,108.0.html -JGW] Mary L. B. has written two other articles in the "Hi, I'm New To Genealogy..." section. [Here is a direct link to her article: http://www.eogn.com/forum/index.php/topic,242.0 -JGW]

In case you have not figured it out --- Mary L. B. is Me. With or without my 2 cents, it is a very worthwhile free newsletter to subscribe to.

- Submitted by Mary Lou Bevers (Evansville, IN and a TSGS Founding Member) 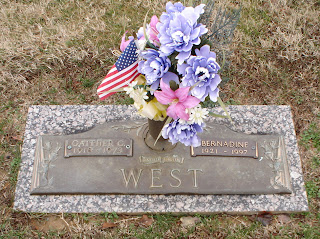 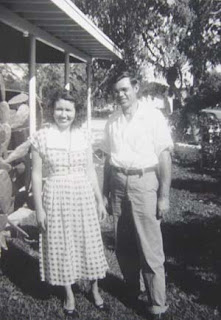 Mom was born and died in Evansville, Vanderburgh Co., IN and Dad was born in Ovil, Christian Co., KY and died in Evansville. They had three sons and a daughter, eight grandsons and, now, great grandchildren. Thanks Mom & Dad for all that you gave me. Although you are gone, you will always be in my memory and my heart. You were good parents and I pray I was a good child. Photo taken in Miami, FL at the home of my Grandma Gilkey in the 1950's (may be 1957). Notice the tall cactus next to Mom.
Photo submitted by John G. West

[Tombstone Thursday is dedicated in memory of Donald G. West 1952-2000]
Don was my little brother and Mom & Dad's youngest kid.
Posted by TSGS at 7:08 AM No comments: 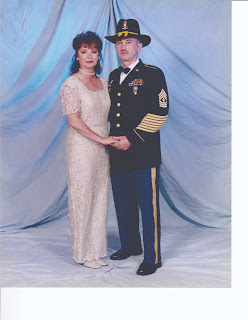 John was awarded two Bronze Stars during his 24 1/2 years in the United States Army. John & Nina traveled thru Europe, California & Georgia. He was wearing a calvary hat in the picture. He was a First Sgt. for a few years and it was in the Calvary unit, yet he was a tanker. He was a Master Sgt. and had 9 years overseas.

John Alemao was born 16 Sept. 1958 and died 2 Sept 2004 which was 2 years after retiring (he was 45). "He was born on the island of Pico, near Portugal. We were stationed at Ft. Knox, which was his final duty station before retiring. We were married 16 years with no children, but we have a Scottie named Sebastian... my best friend." She also says that Geneaology is a godsend. - Submitted by Nina Alemao 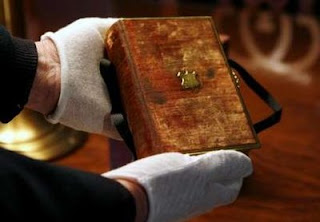 Above is a photo of Abraham Lincoln's Inaugaral Bible that President Obama used to make his oath of the Office of the President. Photo taken 23 Dec 2008 by REUTERS/Kevin Lamarque (UNITED STATES).

"President-elect Obama is deeply honored that the Library of Congress has made the Lincoln Bible available for use during his swearing-in," Presidential Inaugural Committee Executive Director Emmett Beliveau said in a statement Tuesday. When Barack Obama takes the presidential oath of office Tuesday, he will place his hand on the same Bible that Abraham Lincoln used at his inauguration in 1861. Obama, as the 44th. President, will be the first incoming president to use the 156-year-old Lincoln Bible, which is bound in burgundy velvet and has heavily gilded edges. There's a story behind the Lincoln Bible. With the threat of civil war looming, Lincoln came to Washington in secret because many feared there would be threats on his life, said Jennifer Gavin, a spokeswoman for the Library of Congress. Because of his quiet arrival in 1861, many of Lincoln's belongings -- including his family Bible -- were still en route from Springfield, Ill., she said. The 1,280-page Bible used by Lincoln was purchased by Supreme Court clerk William Thomas Carroll. The cover bears a shield of gold wash over white metal with the words "Holy Bible." The high court's clerks often provided a Bible for the ceremony. William Howard Taft, who after his presidency would, as chief justice, administer the oath for Calvin Coolidge in 1925, swore upon a Bible that had belonged to the court for a century. Compiled by JGWest (Sources: http://www.msnbc.msn.com/id/28366102/ and http://www.politico.com/news/stories/1208/16813.html )

Don Counts sent me this link to Inauguration video clips of 11 Presidents that are all very interesting:
http://www.parade.com/news/2009/01/inauguration-videos.html?index=2 From: "ClustrMaps Team"
Posted by TSGS at 7:14 AM No comments:

"America 'Re-Cycling' as Never Before!"

(Click each photo to get a larger, better view of it) 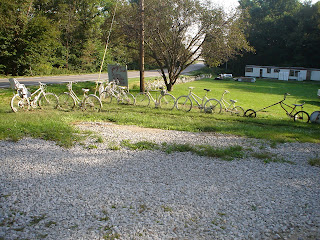 Here is one of the most unusual fences that I have ever seen. It is "re-cycling" to a fault! This is a business along US Highway 231
between Greencastle and Crawfordsville, Indiana all just north of I-70 between Terra Haute & Indianapolis. I found this on my way to Wabash University to give a "Flags Over America" program for a DAR & three SAR Chapters in 2006. I had to stop and take photos of it. I was reminded of this fence yesterday as Don Counts, JD Strouth & I went up to Depauw University in Greencastle for a INSSAR House of Delgates State Meeting. All three of us are state officers and attempt to attend the four state quarterly meetings. 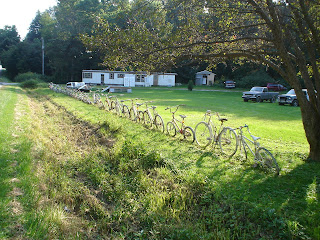 This is the perfect type of business to have such a fence... it is a junk car yard with lots of other re-cycables items: camper shells, trailers, etc. But the actual business is painting cars. Becky was with me on this adventure to see this great wonder of the world. She stayed in the car while I took these historic photos. I am not sure that she appreciated the value and "beauty" of this marvel & pure delight that I had found on that glorious day. Well, you have to admit that this fence is like none you have ever seen before! 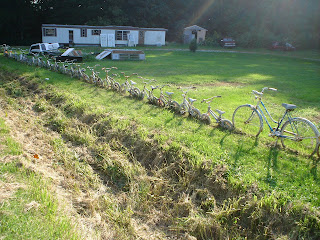 Notice that the bigger bikes drop down to smaller bikes. They were all painted white and chained to metal stakes in the ground.

Photos taken by John G. West
Posted by TSGS at 10:03 AM No comments: