.
At Burdette Park there are 5 very nice chalets ...

I have wondered about the dedication of one chalet for a long time, it is the only one with a thin metal plate that has tarnished somewhat. Here is what it says: "Dedicated to David S. Garrett July 23, 1993." I asked about him about 10 years ago and someone on the Burdette staff said that he was an employee who had died in an accident. Recently, I was at Burdette Park and noticed the plaque and took a picture of it with my new cell phone (below). 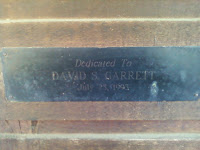 I checked the online Browning Database to see when he died and maybe what happened to him. Garrett died on a Sunday 07 Mar 1993 from a motorcycle accident onUS 41. He was 32 years old. He was an ironworker and carpenter at Burdette Park.

- Compiled by JGWest
Posted by TSGS at 8:24 AM No comments:

When you see a red flag it is a serious warning of some sort.

While researching your family history, you will come across red flags all of the time. You have to look for them as you try to determine the validity of the information you gather. Just recently a fellow researcher sent me some new information on one of my lines with a big red flag waving at me immediately. The information was without sources [red flag all over this info], but the big red flag was that the claimed father died four (that's 4) years before the son was born. There is something wrong here... that just does not happen! So, the red flag should pop-up in your mind to suspect this information. A genealogist has to be a good detective and good researcher... you do not have to know everything, but you need to know to follow-up on info and know where to look to verify information. Rarely should we just accept something because someone has it in their database or family tree without citation of legitimate sources (documents - primary sources) or at least a discussion of the logic in arriving at the theory being offered.

So, here we have this father that seems to give birth long after he is dead. How do we check it out? If the information had a source (for the death date) we could go to it and find that there was a typo error on the date or that it was valid. You need to check the birth date of the son, too! How was the date determined (no source listed again). This means that you can not accept the father/son relationship until you prove it is so. Just because it is printed in a book, on the Internet or sent to you by your very "smart" cousin does not make it correct... someone needs to prove it; otherwise, it is just a guess or theory that needs to be proven. Generally, if the red flag pops up and there are no sources to work with, I tend to think it is probably false... just wishful dreaming.

Another Red flag should pop-up when someone says: "I have conducted a complete (or exhaustive) search and there is no records available to prove my theory, so we must accept it on the basis of circumstantial evidence." This means they do not know where else to search and have given up - basically, they are willing to accept a guess or theory as fact. The person that had the father who died 4 years before the supposed birth (after I pointed it out) stated they never noticed that gap. But, gaps and other problems have red flags that we should be looking for.

I hope the idea of "red flags" is helpful to researchers to question what they find or receive from others. We should always ask, "how do you know that?" Another question: "Is this really proof?" I plan to include "More Red Flags" in future articles. If you have some "red flags" send them in to me, I will give you credit for the warning you point out. 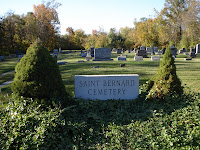 .
My grand daughter's version of patriotism...

Halle West of Cincinnati drew this bust of the Statue of Liberty with the U.S. flag as background at school this year. Halle is six years old. 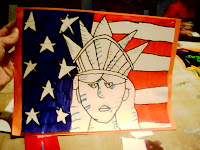 I started asking relatives about our family. Who were they, where did they live, where did they come from, what did they do in their lives? Dad knew his great grandfather William Ellis West and Cincinnati, his wife - plus several of William's brothers. This would prove very helpful many years later. It was well known that the courthouse in Christian County, Kentucky was burnt down during the Civil War. He assumed all of the records were lost forever. A few years after Dad died his Aunt Eva died intestate (without a will) in Christian Co., KY. A legal problem surfaced concerning the estate that led me to an attorney in Hopkinsville for advice. As I left his office across the street was the courthouse with a large Historical Plaque. I decided to read it. The courthouse was burnt down during the Civil War, but the townspeople knew in advance... all records were saved back to the forming of the county in 1797 and still intact today! I checked records for William Ellis West using the index. In the first book he was listed with all of his siblings (several I knew from Dad) as heirs of their deceased father's interest in his father's share of the estate of his father! So, this one document stated that William Ellis West (with wife Cincinnati & his siblings and spouses) were the children of Jesse West, their father, who was the son of Charles H. West (Jesse's father) whose share of his father's (Thomas West) estate was the subject of this document. I thought this can not be this easy! I told the clerk of my discovery. A lady overheard me and told me about Shirley West Cain - a Christian County WEST expert! I called Shirley and gave my descent from William Ellis West to my grandfather Warner West. She asked that since Warner only had one son, Gaither, which of his kids was I... Glen, John or Don? She confirmed my whole line back to Thomas West and that I was qualified for Sons of the American Revolution (SAR)!

-Submitted by JGWest
Posted by TSGS at 12:40 PM No comments:

... is exceptional in its beauty as a historic building, let alone its genealogical & historical collections. The Willard is a premere genealogical research center with reference material from most of the United States with a strong concentration on the tri-state area of SouthWestern Indiana, Southern Illinois & Western Kentucky. It is surprising that I have just got around to taking a photo of the plaque at the entrance to Willard Library (my second home). Visit Willard Library's web site: http://www.willard.lib.in.us/

- Photo taken & submitted by JGWest
Posted by TSGS at 7:25 AM No comments:

"Perry Township Trustee David Mosby picks up branches in Lyon Cemetery near the Tekoppel Avenue underpass on Thursday morning while giving a tour of the cemeteries the township is in charge of maintaining. There are very few headstones in the cemetery, most dating back to the mid to late 1800s. Money is tight and often allocated for other things, Mosby said, so oftentimes there is not money to do much more than cut the grass and simple maintenance in all the cemeteries."

[What will happen to Indiana's small cemeteries that are being maintained by Township Trustees, if Indiana eliminates Township Trustees? What do you think about this? Make your opinion known! - JGWest]