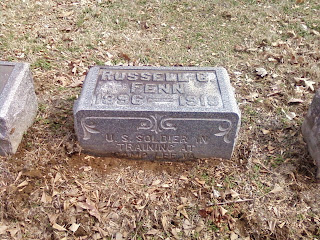 These two cards were copied from the Browning Genealogy Database Online

A colorful sign at the Mesker Park Zoo in Evansville promoting the zoo's "Adopt an Animal" program. My Ohio Valley Chapter of the Sons of the American Revolution have been adopting an American Bald Eagle for the last five years. One of the local DAR chapters followed our lead and are adopting an eagle, as well. The "adoption" program offers several levels of donating to the zoo to help raise money for the zoo. The donors/adoptees recieve a certificate and get a paw-shaped sign with their name that is placed on a larger board and promently displayed at the zoo. 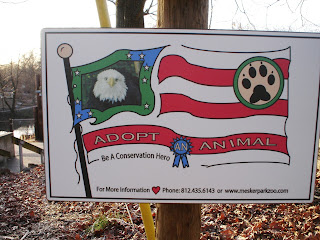 - Photo taken by JGWest
Posted by TSGS at 4:17 AM No comments:

"For My Sister, Tina"

Tina, this has been around for the last five years or so, but thought you and others who live far away might appreciate seeing these changes in Evansville.

First off, we have a dinosaur downtown pointing the way to the Koch family "Children's Museum of Evansville" (cMoe)... my grandkids from Cincinnati love this place! 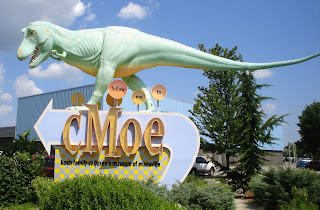 Below is the home of cMoe... yes, it is the former building for the Evansville Central Library that has now moved to its new home a few blocks away. 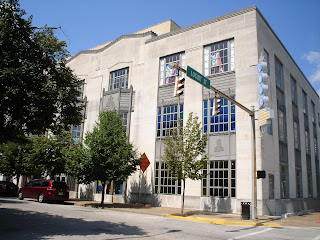 Below is a photo of the new Central Library - a very nice facility. It is across the street from The Center in the southeast corner. The northwest corner is where the Executive Inn used to be... Tina, I guess I will need to show you photos of that in the next few days or so. 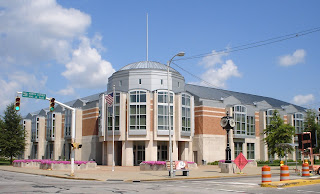 This monument is dedicated to the military, men & women,

who served heroically during the Persian Gulf War... 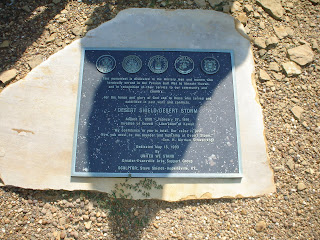 The monument of these two soldiers faces the City/County Civic Center. If you look to the left, you will see the new downtown arena. 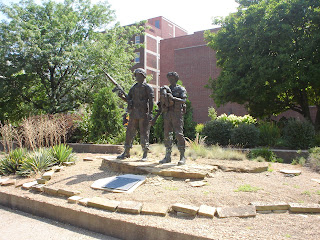 Sons of the American Revolution

(Open on Saturdays until Labor Day) 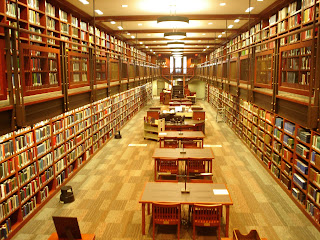 Just a couple hours drive from Evansville is the new site of the library (pictured above) for the National Society of the Sons of the American Revolution (NSSAR). It is very beautiful and well organized. It is located across the street from the Louisville Slugger Museum & Factory with the super giant-sized baseball bat leaning against the museum five-story building. Becky & I was visiting the museum (yesterday - Saturday) and noticed that the library was just across the street (I had planned on taking a close look at it later). After our museum tour, we planned on walking to the Hard Rock Cafe for a late lunch... so we crossed the street to look through the windows. The sign said it was open on Mon. - Sat. 9:30 AM to 4:30PM and it was only 4:27PM! We opened the door and apologised for coming by so late, but just wanted to take a peek. The receptionist was so very nice and told us to go into the library. Mr. Michael A. Christian, MLS is the Head Librarian who insisted on us taking a good look at the Library despite the fact they were now closed. I took the above photo to show off this library collection of over 70,000 (non-circulating) volumes. The collection is available for on-premises study at no cost to SAR, DAR, CAR & SR members and to the public (for a nominal charge). In 1958, Librarian General Robert S. Walker defined appropriate & acceptable library material to that which was "exclusively genealogical, historical (Revolutionary period or thereabouts), biographical, and town, county or state histories." Visit the NSSAR Library Online which is currently undergoing reconstruction! 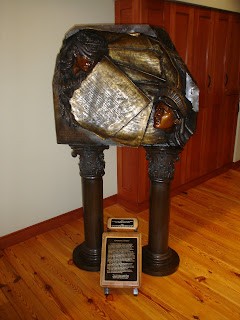