.
Christmas 2009 is almost here... Many of my SAR friends marched in the 2009 Downtown Christmas Parade as a Revolutionary War Color Guard. This same parade back in 2002 was my first local Color Guard event. This year, I was not able to participate. A friend, Don Counts, is a member of my SAR Chapter and is in the Color Guard, but like me, he could not march either. Back in 1994, Don Counts took his grand daughter to this parade. In the Evansville Courier picture below is Nikki Ervin with Santa... Don provided the "power" for Nikki's wheelchair. 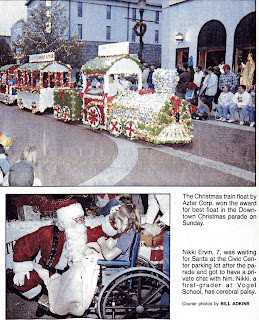 Below is a photo of Nikki today with her son Ryan reading a book to him. Nikki is still in a wheelchair, but this one is battery powered. Ryan is Don's fourth generation descendant. 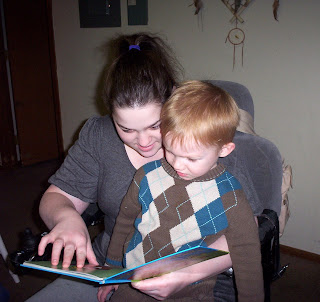 Nikki has come a long way since that 1994 Holiday Parade.

- Commentary by JGWest
- Photos submitted by Donald Counts
Posted by TSGS at 12:04 AM No comments:

"Yes, Mary Jane... there is a Spirit of Genealogy!"

I want to know my family roots. Is there truly a “Spirit of Genealogy”? Some of my friends say it can’t be done. My mother says that if you see it in “The Handy Book” or on “Ancestry” it must be true. Please tell me, is there a Spirit of Genealogy?

Your friends are wrong. You can find your family roots and the Spirit of Genealogy will help you. The Spirit lives in the memories and records of all your ancestors. On Christmas Eve, the Spirit flies through the air on a Conestoga wagon, pulled by dray horses. She visits all the libraries and courthouses. She goes to the cemeteries and newspapers and the National Archives, and she leaves clues about your family for you to find during the year. When you write your letter to her, be sure to tell her everything you’ve found and send her copies of your charts and group sheets. She will reward your efforts by putting research hints in your stocking or on Face Book.

Yes, Mary Jane, there is a Spirit of Genealogy and she will live as long as people cherish their families and want to know about those who went before us and made us who we are. Happy Hunting and Merry Christmas!

[Copyright 2009 by Lyn Martin]
The above was written by Lyn Martin, Director of the Special Collections Department of Willard Library - used here with special permission. The letters are published on a large parchment paper and on special display in the case at the top of the stairs to the Genealogy & History Department.
Posted by TSGS at 7:23 AM No comments: 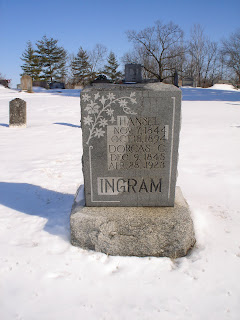 .
Photos taken by Brenda Jerome of our Christmas Social last night. Despite the terrible rainy night most of the TSGS officers and some of our local members made it out to Willard Library to enjoy holiday snacks & treats and fellowship with each other. Larry Goss brought his Keystone steropticon that shows pictures in 3-D... really cool. This gadget was the front runner of the View Master with its round disks. 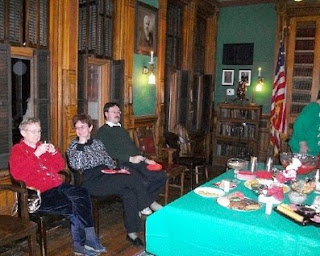 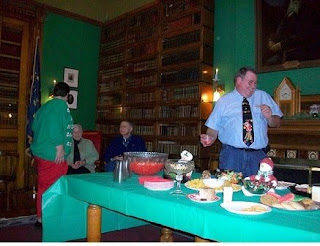 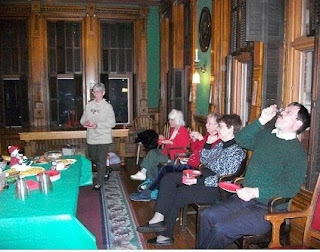 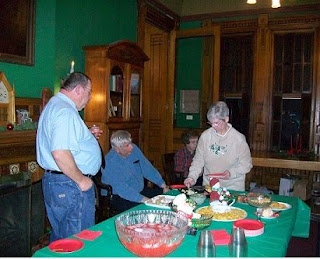 L-R: TSGS President John G. West (who probably should go on a diet!); Board Director Larry Goss; Board Director Rena Goss; Board Director Becky West. Other officers attending, but not pictured were TSGS Board Director Don Counts & Secretary Brenda Jerome (photographer for the night). And also attending was Lyn Martin (TSGS Ex Official Board Member representing Willard Library). Many of our members and officers take a quick punch & snack break and then back to researching! Some sat around and told jokes & stories.
I told the story that happened at my mother's funeral in 1997. Mom and her brothers were all Catholic, but Dad was not... so all of us were not raised Catholic. When the Priest came to the visitation at the funeral home to perform the Rosary... Mom's three brothers and families (all Catholic) slipped out the back door. I looked around and suddenly noticed there were no Catholic visitors present. I went to the Priest and introduced myself and informed him that the only Catholics present was my mother & him. The Preist said, "You mean the only two Catholics here is me and the deceased?" He laughed and said this will be a first! He gave as good a Rosary as I had every heard, but he did cut it short.

My connections to Benoni Stinson...

Later in life, during the summers between attending classes at Evansville College (now University), I worked at George Koch Sons where I met Allan Puckett, who was my age and was an associate pastor at Evansville General Baptist Church. I began attending this church on a regular basis with Reverend Floyd Kirves the head pastor. I learned a lot of what a Christian was all about from Rev. Kirves and Brother Puckett. Just before, I answered the call to service during the Viet Nam conflict, I moved to Sterling, Illinois to help Allan with his first church... I was appointed the Sunday School Superintendent... here I was baptized in the General Baptist denomination. While I was in the U.S. Air Force, I met and fell in love with Becky and was married in a Southern Baptist Church by a General Baptist preacher, Allan Puckett (one of my two best friends). Dennis Avery was my other friend who served as my "best man."

After serving my 4 years in the USAF, Becky & I came home to Evansville and began raising a family and began attending Rev. Kirves' General Baptist church again. I had worked on my family history research since I was 12 years old, but did little letter writing or research while in the service. I got back into working on my family history. I learned and have documented that Benoni Stinson married a family member Ruth Martin. Ruth's father was John Martin, Jr. brother to my direct ancestor Thomas Martin. My ancestor Joseph Martin was the son of Thomas and a first cousin to Ruth Martin who married Benoni Stinson! I had grown up admiring Benoni Stinson not knowing that he had married into my father's family.

The December issue of our society's quarterly journal Tri-State Packet will have an article submitted by a Stinson descendant that includes Benoni & Ruth Stinson. Below are photos connected with Liberty General Baptist Church in the Howell west side neighborhood of Evansville. Click on photos for a larger, better image of each. 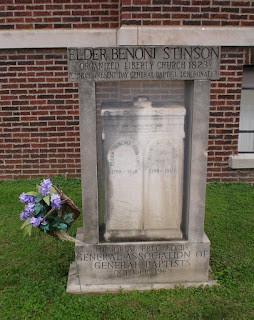 There are several grave markers for Benoni located in many sites... this is one erected in honor of his establishment of the Liberty Church 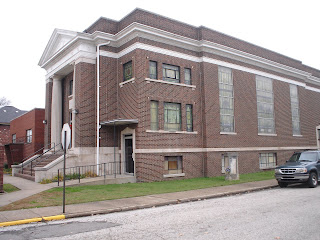 This is the south side of the former Liberty G.B. Church. 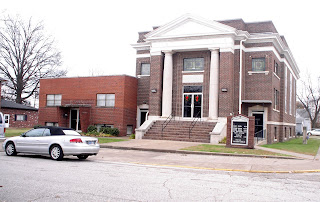 Above is a full view of the front side of the church. 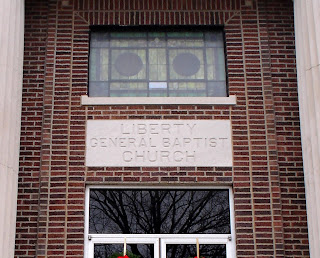 Above the front doors of Howell General Baptist Church is the former Liberty name engraved in white stone. 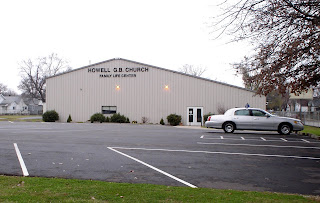 As you could see in the photos of the church building there were several additions. Across the street to the west is the newest addition to Howell G.B. Church - the Family Life Center.

Be sure to read more about the Stinson family in The Tri-State Packet (edited by Brenda Legate).

.
Hose House #9...
is one of Evansville's newest fire stations located on Keystone Drive.

It was built in 1989, just north of Morgan Avenue & east of Green River Road. 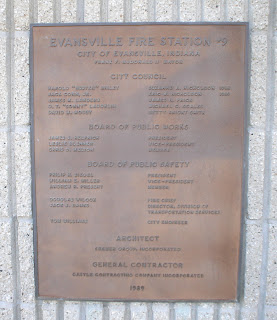 A very large "9" helps to identify this building, perhaps the smallest in size. 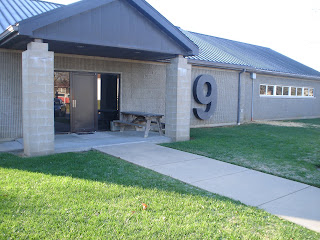 The fire fighters proudly fly the U.S. flag out front of the building. It looked very beautiful the morning this photo was taken! 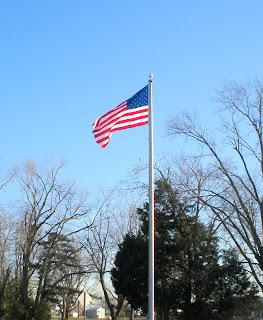 - Photos taken & submitted by JGWest
Posted by TSGS at 7:26 AM No comments:

NAVIGATING ALONG the RIVER -
Research Tips

.
As blogs become more popular, we will all be able to find blogs that interest us... if only we have time to read them!

You can search for genealogy related blogs, here is one site: http://blogfinder.genealogue.com/ You can also Google 'Genealogy Blogs.'

In an article I wrote concerning genetic DNA testing "Why DNA?" was the following statement: And as Beau Sharbrough pointed out in his article in the Ancestry Daily News, “DNA has replaced blood in the determination of ‘blood relationships.’” Sharbrough worked for Ancestry.com then he went on to Footnote.com and since has left them. According to Eastman, this puts Beau in a good "insiders" position to evaluate what is happening with these companies. Dick Eastman has a very good blog to keep up with what is going on in genealogy advances, changes and special interests: http://blog.eogn.com/ To see Beau Sharbrough's blog go here: http://tufblog.com/ Another great blog, perhaps the best, is Dear Myrtle: http://blog.dearmyrtle.com/

At least one TSGS member has a blog... Brenda Joyce Jerome, CG. Check out her Western Kentucky Genealogy Blog at http://wkygenealogy.blogspot.com/ Here are a few that I like to check out when I have time: Bill West's West in New England http://wkygenealogy.blogspot.com/ and Randy Seaver's Genea-Musings http://www.geneamusings.com/ Let us know your top genealogy blogs!

- Compiled by JGWest
Posted by TSGS at 9:56 AM No comments: