This book is now online and it is streamed to let you virtually turn (flip) the pages yourself! It has some biographical sketches & a directory of people. Take a look ( book can be enlarged, zoomed to read): http://www.archive.org/stream/historydirectory00leon#page/n17/mode/2up

Thanks to Don Counts for submitting this!
Posted by TSGS at 1:55 PM No comments:

TSGS Meeting Report For Those Not In Attendance

Becky West giving her program:
"A Personal Journey to the Beginning - My Adoption Story" 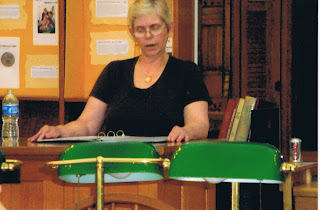 For all of those who could not make the last TSGS Meeting... on 10 May 2011 at Willard Library, I offer a summary.

Treasurer Bettie Cook reported a balance of $6,234.67... we will have two more major expenses to the end of our fiscal year in June. The June issue of the Tri-State Packet at just under $800 and the Book Acquisition Committee's $2,000 will leave us on balance per our budget.

Lyn Martin, Willard's Special Collections Librarian, gave her report which included the library's Mid-Night Madness event of the week of June 20-24. The chart of the programs and details for each program was posted in this Saturday’s blog. Lyn & Connie Conrad will travel to the Cumberland Gap for a seminar and will bring along TSGS books to sale.

Karin Kirsch, a member of the Long Range Planning Committee (LRPC) announced a meeting for our first TSGS Special Interest Group (SIG) for German Researchers will be held on July 30th. More details will be announced in a future blog. The LRPC hopes to create several SIG's including ones for Irish researchers, computer skills, Kentucky, Indiana, Illinois and others!
The President announced that Janet Mann recently completed an inventory of all of our books for sale in the storage closet in the library's basement. Thanks very much to Janet! The LRPC will recommend an event like a book fair to sale some of our excess books at discounted prices to reduce the large volume of books taking up limited space.

Our Program Chair presented "A Personal Journey to the Beginning - My Adoption Story" as traveled by Becky West. She included how she found her birth family along with the documents that she passed around. There were three stories relating coincidences that makes for a small world. Here is one small excerpt that gives this journey of hers some importance to her. "I discovered my missing birth story; and, now, I know who I am! It is amazing that the name “Rebecca Louise” that I had always disliked was actually the name that my birth mother had given me and now I feel it is the best gift my mother gave me besides life. I learned that my adoption was not my fault, that nothing horrible happened and that my mother had to give me up because she had too many kids and not enough money to support them. This knowledge has filled that void I had always felt and it has lifted my confidence and self-esteem." She concluded with her poem: "Message to My Birth Mother" (who had died before Becky could meet her). 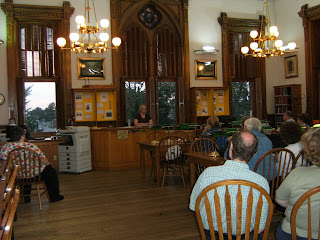 Photos of Becky West giving her presentation on her adoption story with some of the members that were present.
[Photos taken & submitted by Claudette Pfingston] 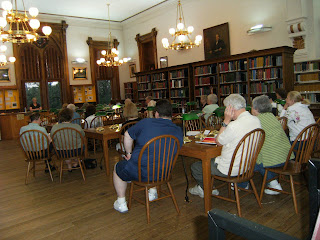