Last week was a very bad week in the United States.  The Boston bombings and the fertilizer plant explosions in West, Texas will long be in our memories as a nation prayed for the families of those who died or were injured.  My family has a connection to the town of West, Texas.

Thomas Marion West was born November 5th, 1834 in Christian County, Kentucky. After moving to Texas he fought in the civil war becoming a Captain in the 19th Texas Cavalry Regiment. After the war he married Martha Jame Adams Steele in McLennan County, Texas. He was a farmer and later became the Postmaster at the Bold Springs train depot. The train depot was built on land originally owned by Thomas West. Later the depot with Thomas West as postmaster became known as the West Depot and in 1892 the area was incorporated as the town of West. Thomas West died on January 27, 1912 and is buried in Rock Creek Cemetery in Ross, Texas, about 5 miles south of West. 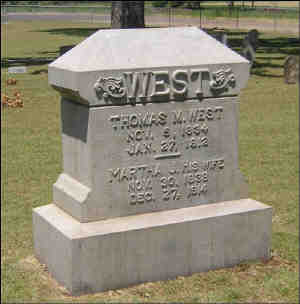 Another son of Charles H. West was Thomas Allen West who also went to Texas settling in Denton County.

- Compiled by JGWest  [some of the above info was obtained from a web site supplied by Sandra Abbott yesterday http://www.west-tx.c­om/genealogy/ThomasWe­st/ including the grave marker photo (photo taken 7/5/2008 by bvm)... no contact info was available.]