For My Sister, Tina

'
Tina, I wanted to show you and those who have not been to Evansville for awhile, a big change in the Evansville high schools. As you might remember quite some time ago, the "new" Central High School was built in the north on First Avenue (further north than Ivy Tech which was Rex Mundi High School). Central was built close to the center of Vanderburgh County; however, it was a lot more north than North HS. But this year, all of that has been corrected with the building of the new North HS on U. S. Highway 41 near the northern county line! So, finally the directionally named schools are back to the proper directions!!! The first photo is a shot at the front of the school facing north. This building is somewhat unusual in that from the right side going south the structure has sections or what I call "modules" that each module is a section of a fan-shaped larger structure making it circular. I could not get an angle to get a shot that might show that. The left side of this photo shows the back side that circles around to this point leaving an indention like that of a handfan! [Please click on photos to get a larger, better image.] 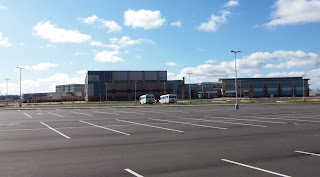 Below is a close-up view of the front entrance. 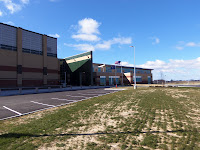 In this photo you can see the front door and a sign for the school's name. 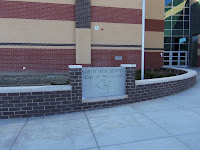 Now, in this shot below is a look at the "module" section I mentioned. It is somewhat modernistic for solar energy and designed for maximum energy use. Note that every exterior doorway has a number. Notice all of the color variations. From the highway each of these sections look like fan blades that are the latest in condo housing! 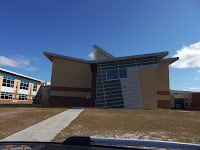 Below is another view facing north. 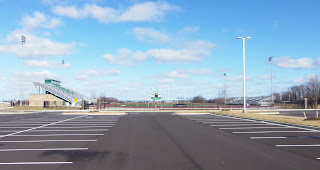 I took these photos on 15 Feb 2012 on a beautiful sunny day which was probably the coldest day of this whole winter with some very high winds making the windchill at least at zero, making it very, very cold to take these photos.

TSGS Meeting Recap For Those Not Attending

'
Here is a summary of portions of our TSGS monthly membership meeting Tuesday night at willard Library. It was Valentine's Day so the attendance was down a little. We did have 17 to show up. To see a bigger, better image of each photo just click on it and then return to this page. In the first photo, President Don Counts has just called the meeting to order (note clock in upper left... our meetings start at 7PM the second Tuesday of each month). During the meeting President Counts made several announcements. He reminded everyone to make sure we have their current mailing address for the member's journal the Tri-State Packet and that dues are due in July for the fiscal year 2012-2013. The President has appointed John G. West as Chair of the Nominating Committee for the next fiscal year's officers that will be elected in June. 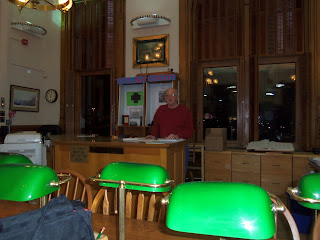 The next photo shows a shot of those in attendance while Secretary Kim Nightingale reads the minutes of the previous meeting. 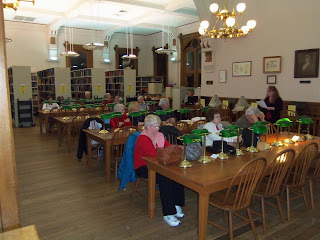 Below, TSGS Program Chair Becky West is introducing our speaker for the night. 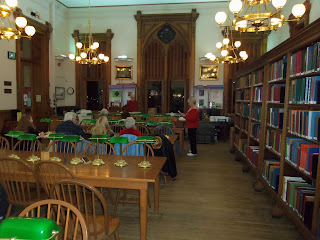 Our speaker was Kim Nightingale who provided us a very interesting and entertaining program she called "Hoosiers on the Oregon Trail" from reports/diaries of many who traveled the route for land. She mentioned at the end that one of the travelers was her ancestor. 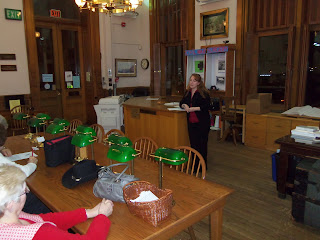 After the program, Becky West gave each lady a little gift to recognize the pioneer efforts of our lady ancestors. Each had a heart to show how much each of us appreciate the efforts of all women - today & in the past! The drawing for the attendance prize was won by Betty Counts who chose a TSGS membership for 2012-2013. The attendance prize is the society's way of saying thanks for attending the meetings. The programs alone are worth the time to attend, but we wanted to show how much it means for people to visit the society's meetings! The meeting was adjourned at 7:50 PM.

Next meeting will be March 13th. when Stan Schmitt will complete is program of Evansville's involvement with the Civil War. His program last fall was cut short by the library's new, young security guard that was totally unaware that we were conducting a meeting and generally stayed a little past the normal closing time. Stan's presentation was so good that everyone wanted he to come back to let us know how the war ended! :)

'
TSGS Meeting Notice... Tonight!
When: 14 Feb 2012 Tuesday Night - Tonight
Time: 7:00 PM
Where: Willard Library - 2nd. Floor
What: Monthly Meeting
A drawing for an attendance prize will be awarded at close of meeting... you must be present to win.
The Tri-State Genealogical Society will have a brief business meeting followed by a presentation by Kim Nightingale ~"Hoosiers on the Oregon Trail." 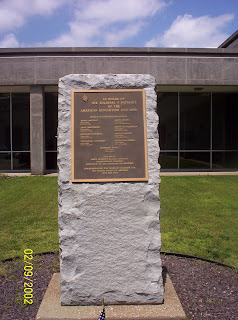 This marker is placed on the grounds of the Winfield K. Denton Federal Building & the U.S. Post Office. Placed by the Mary Anthony McGary Chapter - Vanderburgh Chapter of the Daughters of the American Revolution. 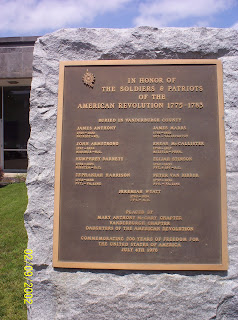 Commemorating 200 years of freedom for the United States of America - July 4th. 1976
- Photos taken & submitted by Donald R. Counts
Posted by TSGS at 9:35 AM No comments:

'
TSGS Meeting Notice!
When: 14 Feb 2012 Tuesday Night
Time: 7:00 PM
Where: Willard Library - 2nd. Floor
What: Monthly Meeting
A drawing for an attendance prize will be awarded at close of meeting... you must be present to win.
The Tri-State Genealogical Society will have a brief business meeting followed by a presentation by Kim Nightingale ~"Hoosiers on the Oregon Trail."