Warrick County brought me notebooks entered by six 4-H members in the Genealogy Project for me to judge for the county fair.  This was last Friday, but I still have about 2 hours to finish evaluating the last ones to judge.  Today Gibson County delivered ten 4-H'ers exhibit notebooks to be judged. The entry for Division 5 in Gibson County looks very nice and has six 3-inch notebooks!  It takes about 30 minutes on average to judge one exhibitor's notebooks... it will take me 4-8 hours to go through the Gibson County exhibits.  But, believe me, judging these exhibits is a labor of love!

I have been judging county exhibits for the last 30 or so years and the Indiana State Fair exhibits for Div. 3 over the last five years.  Having the opportunity to judge at the State Fair is like a super big honor!  I have been involved with 4-H since I was a new first-year member at age 10 about 55 years ago.  It is a great youth organization and I am glad there is a 4-H Genealogy Project.  I served as the Vanderburgh County 4-H Genealogy Project Superintendent for about 25 years.  For the Tri-State Genealogical Society, I serve as the 4-H Coordinator and present awards in four counties in southwest Indiana for 4-H'ers enrolled in the genealogy project.  For the Indiana Society Sons of the American Revolution, I serve as the State Chair of the 4-H Youth Awards.

I can still remember how I felt as a ten-year-old going to the 4-H County Fair for the first time and at age 65 this is always an exciting time of the year!

- Written by JGWest
Posted by TSGS at 9:22 PM No comments: 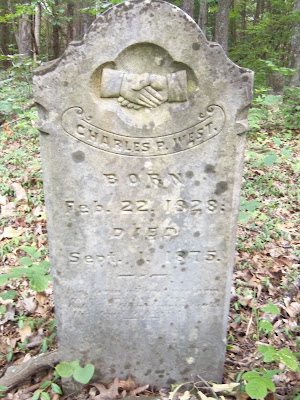 Four brothers are buried in this small cemetery: Charles, Francis, William and Henry Harrison West.  William Ellis West is my great, great grandfather.  These four were sons of Jesse West (1798-1843).  William's mother, Mary Bright Rogers, died shortly after his birth and Jesse married second to Martha Pruitt (Prewit) who is the mother to the other 3 brothers.  Henry Harrison West was the youngest born about 1842 and does not have a grave marker.  Of the 8 grave markers (there are 7-10 unmarked field stones) Charles Patterson West has the best preserved stone.  The largest marker is over 6 foot tall... Nancy the wife of C.P. West died in 1913 and appears to be the last buried here.  W.E. West (1822-1896) is at the front of the cemetery, while Francis M. West (1835-1898) is in the back row.

West Cemetery is on private property and is located in the woods that is reputed to be infested with rattlesnakes. Please get permission from the property owner, Richard Maywald, to visit the cemetery.  His son took us back to the cemetery.  This cemetery has not been visited by many since 1966 when it was copied and published in a cemetery inscription book for Christian County.

Indiana Bones and the Lost Cemetery

The Adventures of Indiana Bones
“The Quest for the Lost West Cemetery”
Indiana Bones has been roaming around “cemetery hopping” in Christian Co., Kentucky looking for the burial grounds for the West & allied families. After going through Ebenezer Church Cemetery, the O'Daniel & then the Cowan Cemeteries, Indiana Bones decided to locate the lost West Cemetery. Calls were made to local cousins in hopes of finding this cemetery... no luck, although, Tommy Henderson tried to figure out where it was. Tommy thought that maybe the cemetery near Frog Hop Road just south of Weathers (Withers) Branch (of Buck Creek) might be West Cemetery. This cemetery turned out to be the Withers (Weathers) Cemetery. At Tommy's suggestion Indiana had talked with Teddy Morgan, left a message with another cousin Eddie Deason and stopped by to see Doris West. No luck with any of these possibilities. Ray Matthews was with the roofers that were working at Doris West house and he suggested talking with the Powell brothers up the road. Well, they were too busy to stop and talk. By this time, Indiana had decided he was going to find this cemetery, no matter what! The 1966 directions had said that this Withers Cemetery was 3.3 miles along Frog Hop Road while the West Cemetery was 3.9 miles and said to follow an unused trail with the cemetery in the woods. After being at Withers Cemetery and taking a few pictures, Indiana Bones decided to see just exactly where this unused trail might be at 0.6 miles from the Withers Cemetery. Just about the location of the Tucker home (name on the mailbox) and a couple of old abandoned homes, was close to the point where the trail was supposed to be. With the passing of 46 years, that trail was long gone (the trail was probably an old logging road). [Continued below, click on photos for a larger image that will make it easier to see.] 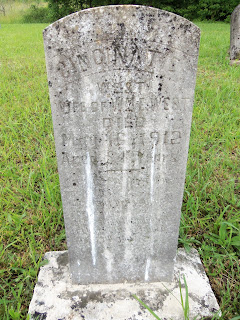 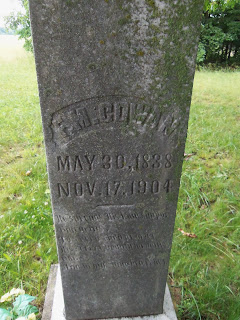 F. M. Cowan is buried in Cowan Cemetery which is not far from O'Daniel Cemetery. 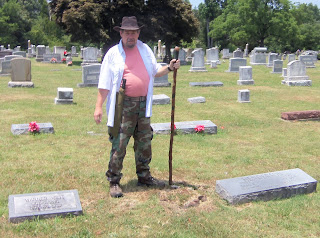 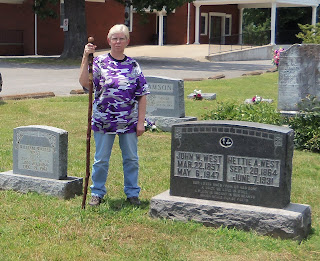 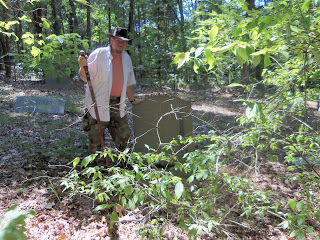 Indiana Bones in the Withers Cemetery south of Withers Branch of Buck Creek.﻿
We decided to stop by the Tuckers and see if they might know about the West Cemetery – they were not at home! We went back toward Withers Cemetery to check with the few homes along there that might have someone that knew about an old abandoned cemetery in the woods. Indiana stopped in at Rick Maywald's home. We mentioned that we had been to Withers Cemetery, but was looking for a West Cemetery. Rick said: “I know where it is.” Indiana said that this was an old abandoned cemetery in the woods with the last known burial in 1913. Rick said: “I know where it is!” Indiana continued - stating that W.E. West, Francis M. West, Charlie P. West (brothers) and a few others were buried there. Rick said, “Yes, and C.P. West's wife is buried there and a few years ago after a big tree knocked down her grave marker we removed the tree and set the marker back up.” Indiana with a weak, cracking voice said, “you... actually... know... where this cemetery is?” “I can take you there” was the response, “it is on my father's property.” Rick is a very nice young man of about 35 years of age who suggested that Becky could visit with his mother while he took Indiana back through the cow pastures, ford a creek and follow a more “modern logging road” back to the cemetery. We were told that this Ovil area is rattlesnake infested! He had a nice John Deere “Gator” that was a great all-terrain vehicle to take us back there. It was a good distance to the dry creek bed (there has been very little rain for some time this year). The creek, by the way, is Weathers (Withers) Branch and we crossed over to the north side of it. We continued back into the woods quite a distance and suddenly, we saw a few tombstones a little ways to the left of us. IT WAS THE WEST CEMETERY! 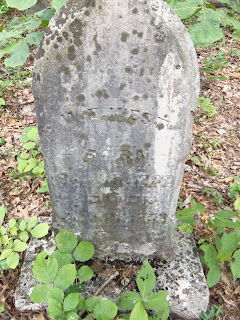 Above is one of the lost graves in the West Cemetery.  This is the grave marker of John G. West's Great, Great Grandfather William Ellis West born 1822 and died 1896.  Below Indiana bones is posing with the marker for W. E. West. 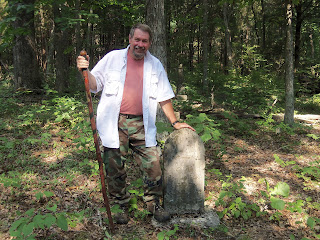 Below you can just barely see some of the markers in the West Cemetery in the woods... photo taken from an old logging road.  Some of the markers look like tree trunks.  There is no fence or sign to help in seeing the cemetery.  The cemetery is located a long way from any sort of clearing like a field or pasture. 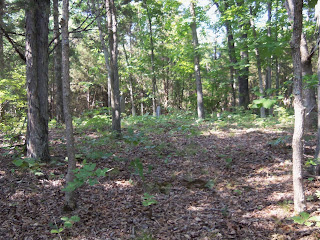 Rick Maywald was my guide who took me back to the cemetery on a four-wheeled vehicle.  He is standing in the rocky dry bed of Withers Branch of Buck Creek.  When the water is flowing this area is a waterfall.  Rick was gratius enough to take the time for me to visit my Great Great Grandfather William Ellis West's grave.  The cemetery is located on his father's property and they clean it up from time to time to keep it from being completely over grown.  They have no family or connections to this cemetery, but since it is on their property they watch over it... God bless Rick and his parents for preserving this cemetery for a little longer! 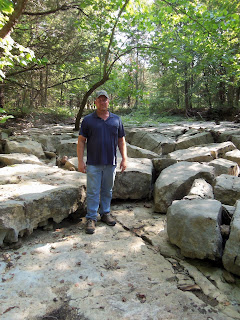 Rick Maywald in the dry bed of withers Branch.
The tombstones are in remarkable shape and readable! Indiana Bones was clearly excited about the find, visibly shaking as he takes photos of John G. West's Great, Great Grandfather - William Ellis West's grave marker (W.E. West 1822-1896). The lost cemetery was no longer lost, thanks to Rick Maywald and his parents.

- Written by Indiana Bones, a “Cemetery Geek”
Posted by TSGS at 1:00 AM No comments:

'
Soldiers & Sailors
Memorial Coliseum
Evansville, Indiana
My first visit to this building was on Memorial Day 2012... it is a very nice facility! 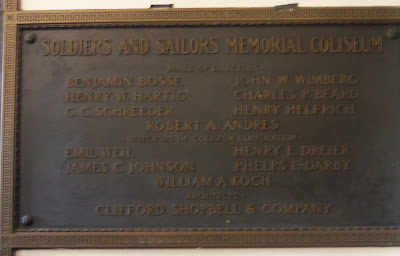 [Click on photos to get
a larger image to read.] 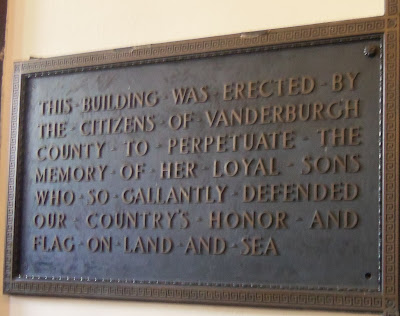 - Photos taken and submitted by JGWest.
Posted by TSGS at 3:30 AM 1 comment:

I present a program to entertain and educate others about our country's heritage through flags... the presentation is called "Flags Over America!"  I have given this program at a TSGS meeting several years ago.  Below I am posing for a photo in front of part of the flags dressed in my Revolutionary War State Militia uniform.  I give the program as part of the Ohio Valley Chapter Sons of the American Revolution Speakers Bureau.  This time I had been invited to return for an encore performance for the DAR/SAR Annual Dinner Meeting in Hopkinsville, KY at the beautiful Oakland Manor. 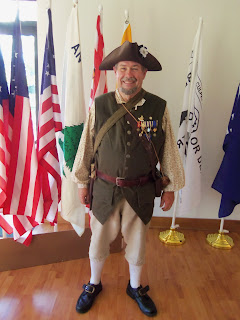 Becky West generally assists me in holding flags for everyone to see.  She dresses in typical Colonial women's attire.  My volunteer photographer, Chad Word, caught Becky relaxing before the meeting began. 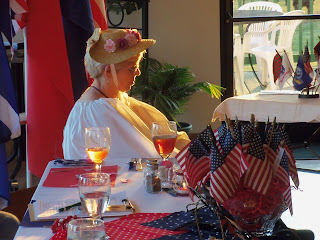 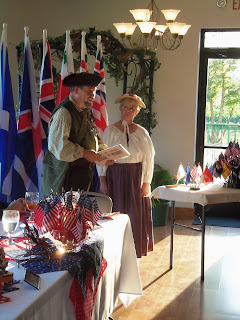 Becky & I just beginning the program in above photo.  Below we are nearing the end of the program showing one of my favorite militia flags known as the Guilford Courthouse Flag.  I had 25-3X5 foot flags on poles for display and to talk about.  This is a modified shorter version of "Flags Over America!" 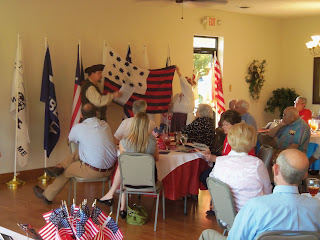 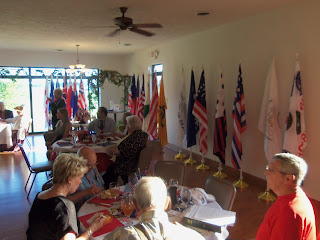 In the above photo you can see most of the flags on display.  My 4th. cousin Tommy Henderson is seated in lower far right corner in red knit shirt.  Below Tommy is giving an SAR report during the business meeting. 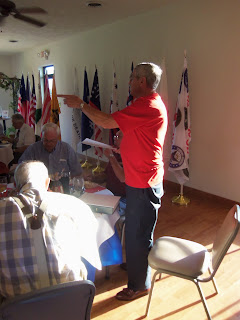 Becky & I had a great time.  I always put in plugs for the Tri-State Genealogical Society, as well as, Willard Library.  Special thanks to my set-up & take-down team of Tommy Henderson, Eddie Deason, Becky West and Chad Word.

- Photos taken by Chad Word.
Posted by TSGS at 3:30 AM No comments: