This morning Ancestry.com added 15 more states to the 1940 US Census database. The following states are now available free of charge at http://www.ancestry.com/1940-census:
Note: the addition of Indiana & Kentucky!!!

From Dick Eastman's online newsletter, I learned that FamilySearch.org has added a new guide to Tennessee ancestors .  An article by Nathan W. Murphy on 06 Jul 2012 highlights what the guide has to offer:

"In this guide, you will find a series of research articles packed with helpful ideas for tracing ancestors in all 95 Tennessee counties! There are articles on extinct jurisdictions... and learn useful tips about using the genealogical collections at the Tennessee State Library and Archives in Nashville."

Go to FamilySearch Blog to read more about the guide.
Posted by TSGS at 3:30 AM No comments: 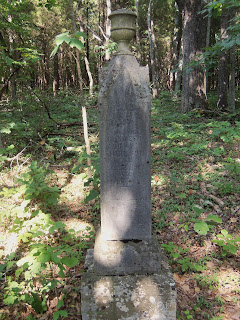 According to the property owners who watch over this cemetery and try to cut back some of the ever-invading woods, a large oak tree fell knocking this tombstone over.  The Maywald family cleared away the tree and re-set the marker as it was!  I am very grateful for their efforts... they have no connections to any family buried here. 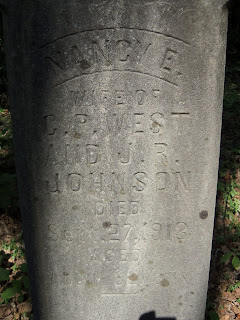 Close-up of the etching on the stone, reads: "Nancy E. Wife of C.P. West and J.R. Johnson Died Sept. 27, 1913 Aged about 82 years"  Nancy is the daughter of Stephen Williams and Jane Henderson.  Charles P. West was the half brother of William Ellis West also buried in this cemetery with William E. West having a wife named Cincinnati Williams the niece of Stephen Williams.﻿ 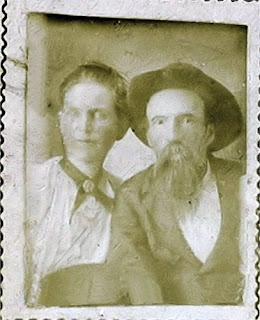 Does anyone know anything more about this photo, Jonas Flatt or the Flatt family?  I suspect that this might be Jonas F. Flatt b. about 1848 in TN.

Ashland, KY (Boyd County) is not far from the point where Ohio, West Virginia and Kentucky meet not far from Huntington, WV on the Ohio River.

- Submitted by JGWest
Posted by TSGS at 3:30 AM No comments: 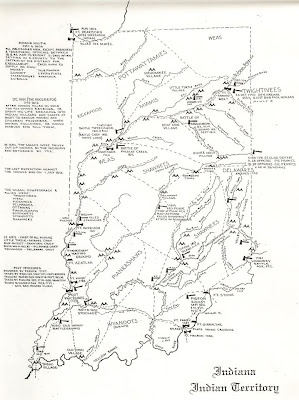 - Submitted by Mark Kreps﻿
Posted by TSGS at 3:30 AM No comments:

Hopkinsville, Kentucky
[Click on photos to get larger images] 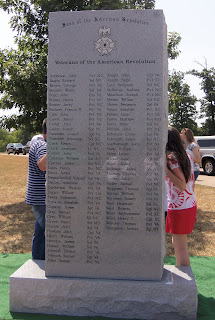 Front side of the SAR marker listing 71 men of
Christian Co., KY who participated
in the establishment of our country
during the Revolutionary War.


On the Fourth of July, I attended the unveiling and dedication ceremony of the 9-foot tall granite monolith memorial to the Revolutionary War Patriots and Soldiers who lived in Christian Co., KY. I am directly descended from Thomas West of North Carolina that is etched on this marker along with 70 other men being honored. Several of these other men are related to me, but are not of direct lineage. 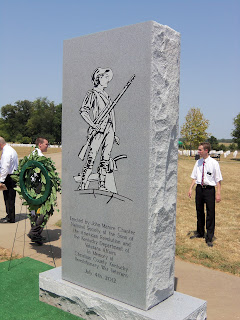 Back side of this large marker.


There were several hundred people present including many of my cousins (along with their families) from my father's side of the family: Tommy Henderson, Eddie Deason, Barbara Oatts Smith, Joan McCarty, Chad Word... there were more that I met for the first time. This was such a thrill to know that my ancestor will be remembered for his involvement in establishing our independent nation! 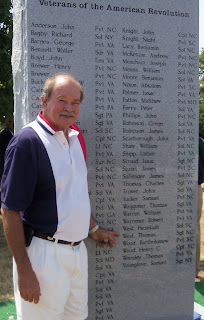 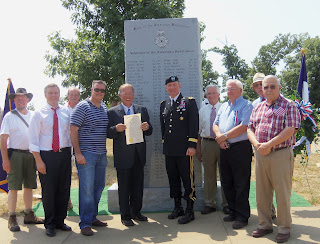 Dressed in a dark suit is Bob Fears, President of the John Manire SAR Chapter and Master of Ceremonies.  He is holding a proclamation from the Kentucky Governor.  To his left (right side of photo) is Major General McConville that gave the Keynote Address, William Turner (County Historian, publisher), and 3 members of the Manire SAR Chapter.  Next to Pres. Fears on the left side of photo is my cousin Chad Word, behind him is cousin Eddie Deason, next is KY State Representative Tilley, then finally me, John G. West, representing the Ohio Valley SAR Chapter of the Indiana Society - and my ancestor Thomas West. 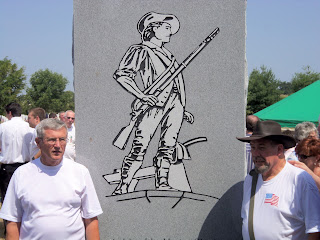 Cousin Tommy Henderson (left), who organized and directed the entire ceremony and was rushing around the whole morning, taking a moment to pose with Indiana Bones (right side of photo)! 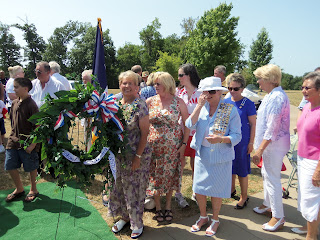 Next to the Colonel John Green Chapter NSDAR wreath is my cousin Barbara Oatts Smith along with several other members of her DAR chapter.

- Compiled by JGWest.
- Photos taken by Eddie Deason, Indiana Bones, and others.
Posted by TSGS at 3:30 AM No comments:

"Digging Up Info About Premature Burials"

'
Recently,
my friend Mark Kreps
posted a photo of a neat little child's coffin from the Ft. Vallonia, Indiana Museum with a small wooden top that slid to one side and you could view the child thru a glass cover. I pointed out that besides the viewing that it might also provide evidence if the child had not actually died because the inside of the glass would fog over if the little one was still alive, even with the faintest of breathing. This would be similar to using a mirror to see if it would fog-up from someone that was believed to have died. 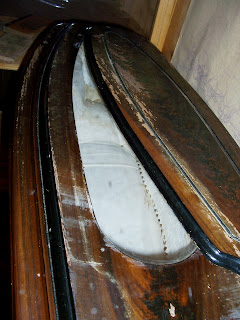 Before embalming became the norm, there existed enormous fear by some people of premature burials or being buried alive... this fear is known as taphephobia. The fear was increased by the tales of people being found in coffins that were clawed on the inside and splinters from the wooden coffin under the “victims” finger nails! Those with this fear went to great expense to have a safety coffin made that would help against a premature burial. Many of these coffins would involve a string tied to their hand and would be attached to a bell or to a spring loaded flag that could be activated by the “deceased” if they should awaken after burial. Some would be designed to signal others before burial. 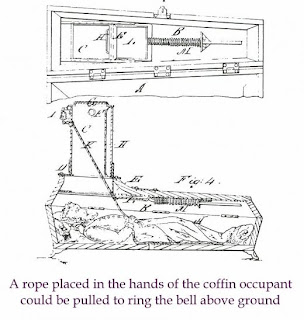 I had said in my comments to Mark's photo that this was where the phrase “grave shift” came from. With my recent “digging up” of some facts about all of this, I learned that my statement might not be true, even-though it clearly stands to reason that if you had a safety coffin, that you would have secured people to watch and listen for your signal. The “graveyard shift” originated, as some believe, to refer to the work shift between the hours of Midnight and 8AM when there was more chance of accidents, etc. I had heard many years ago that the shift was so named because it was harder on people to work those hours or that they would not get as much rest as the more “normal” hours would provide and thus could send you to an early grave. Since, I have pointed out the possible incorrect origin for “graveyard shift,” I feel like I have the obligation to point out 2 other myths. “Dead Ringer” is believed to not have anything to do with a safety coffin or a premature burial. Instead it has to do with horse racers where a substitute or “ringer” was put in that looked very similar to another horse to fool the horse betting bookies... “dead” was added like in “dead on” and people would say things like “Bob is a dead ringer for his Uncle Ralph!” The second myth is “saved by the bell” which came from boxing, not someone from the grave ringing to be saved! The boxer was about to get knocked completely out but the bell was rung for the end of the round just in time!

Here are a few links to some sites that I got information for this blog or has interesting stories:
10 Horrifying Premature Burials


Just Dying to Get Out - Snopes.com

- Written and compiled by JGWest.
Posted by TSGS at 3:30 AM No comments: