One of America's most interesting women, who was lost in her solo flight around the world. Ancestry.com is offering the story and documents for us to look at for free.

"Her bold achievements in aviation made history. Her adventurous spirit remains legendary. But Amelia Earhart’s magnificent and inspiring life was lost in a tragic mystery. In the decades that followed her disappearance in 1937, many theories arose about her fate. Now, for the first time ever online, you can see a unique government case file containing evidence of many questions and investigations that followed." - Ancestry.com

The search went on for years, spanning over decades. Here’s a chance to conveniently view once-classified letters written between the U.S. Congress, the State Department and the U.S.Military — and newspaper reports discussing theories on Amelia Earhart’s disappearance!

Ancestry.com is a subscription (paid) site for genealogical records... this is being offered for free for a limited time. - Submitted by JGWest
Posted by TSGS at 8:55 AM No comments:

In June 1816, 43 delegates met in Corydon, Indiana to draft Indiana's Constitution. The stone Capital building was too hot so they worked under shade of a huge elm tree, now known as "Constitution Elm." The tree died in 1925 of Dutch Elm disease and was cut down in August of that year. Part of the trunk was left standing. The September 1930 view shows a roof built over the top of the trunk. Seven years later, a sandstone memorial surrounding the trunk was completed by Works Progress Administration labor. (Indianapolis Star file photo) 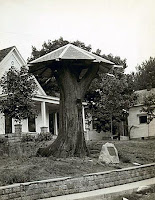 The tree is in the front yard of a log home that was built by Hiram Westfall in about 1810. The log home now has a 2 story frame addition (see last photo). The white frame house in the background is the house next to the property where the trunk of the Elm tree is located. The log house is to the left of this photo.

The log home now has a 2 story frame addition. Hiram later moved to Gibson County. My wife is a descentant. Hiram Westfall & his wife Mary are buried in Antioch Cemetery, Montgomery Township of Gibson County, Indiana.

Log cabin built by Hiram Westfall about 1810.
[An interesting side bar to this story. The Ohio Valley Chapter of the Indiana Society Sons of the American Revolution bought their meeting gavel about 40 years ago made from the wood of this Constitution Elm Tree! - JGWest]
- Article & photos submitted by Joe Weiss


Engraving of angel and children floating around...

Caroline Knoll's marker has fallen over lying flat on the ground. The marker has a nice pattern for the top of the stone with the angel & children engraved upon a large ball or encircled area on the stone. This is in Locust Hill Cemetery in Evansville, Indiana. 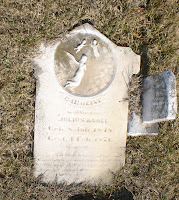 As a member of the Evansville Vanderburgh County Advisory Board for People With Disabilities, TSGS Board director Don Counts, had a chance to provide members of the community information mainly aimed at what to do if you are discriminated against because of disability, age, color, and any other cases of discrimination. 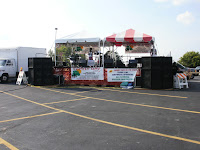 Don Counts is the second from the left in the photo below. 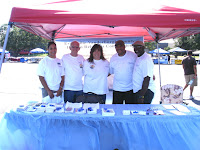 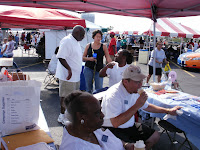 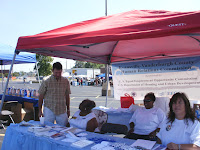 [This was submitted this morning. I did not have anything for yesterday's Monument Monday! - JGWest]
Posted by TSGS at 1:07 PM No comments:

"Willard Library Among Midwest's Most Haunted"

Evansville's favorite ghost, the Grey Lady of Willard Library, was featured over the weekend in a Chicago Tribune roundup of the best Midwest haunts. 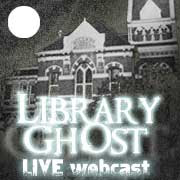 Photo taken from the above article online at courierpress.com