What in the world is a "Cemetery Geek?"


Last Sunday, I attended the Oak Hill Cemetery Walking Tour led by Dennis Au, Shawn Dickerson & Chris Cooke.  A newspaper reporter was asking several people why they came out for this tour.  When she asked me that question... I could not think of a good answer.  My thoughts were in the notion of who wouldn't want to be in this tour!  As a genealogist, most of us love cemeteries, as we do courthouses, libraries, genealogy web sites, family photos and records of any sort.


I told the young reporter that as a genealogist I could not help but be here... I guess I am a "cemetery geek!"  I could not think of anything else to describe why I came out for this tour!!!  Well, that got into the newspaper story, in fact it was the first paragraph about the tour.  I was listed as a "self-proclaimed cemetery geek."    http://www.courierpress.com/news/2012/may/21/oakhill-tour-line-p/?print=1


Being highly interested in science, math, etc., the term "geek" (to me) is basically a positive adjective of a person's in-depth interest or involvement in a particular subject.  I have always been interested in seeing these little monuments (often called grave markers) to people's lives since I was a kid of about 12-13 years of age.


My mother was an avid fan of Memorial Day, a time to remember our American soldiers and family members.  Mom would make Dad drive her around to all of the cemeteries with family to decorate their graves with flowers.  After a time, it was hard to tell who wanted to do this the most.  Of course, us kids were dragged along, too.  I started to get curious about all of these graves... who were these people to us.  That and a 5th. Grade English assignment to make a 4-generation family chart got me interested in my family history.  Shortly after I got out of service, my father died which made grave visitations a little more important to me.  The next Memorial Day and many years afterwards, my younger brother Don and I took turns taking Mom around to decorate the graves.  Mom's Aunt Maggie Wood decorated graves, too.  Don & I began putting out flowers, too.  Then, suddenly in about 2 years time - Mom, Aunt Maggie & Don were no longer with us and there really was no one else alive to decorate the graves or know where most were buried.  So, this became my primary "duty!"  We decorate my wife Becky's family, too.  Becky has a birth & adopted family to remember.


I have become a volunteer for a web site called "Find-A-Grave" to take grave marker photos to post online for others to be able to see their family's markers.  On this blog I have a feature called "Tombstone Thursday" that I post interesting or unusual grave markers that I find from time to time.  I even have a photo album on FaceBook called "Cemetery Hopping" (going from one cemetery to another & posting photos from each!).  Yesterday, I told my friend Jill Brinkley who works at Alexander Memorial Park Cemetery that we were out cemetery hopping decorating family graves... she said you are always going to cemeteries!  I guess she is right!


I guess cemeteries have become a part of my life... I was once even in charge of Evansville's City owned cemeteries - Oak Hill & Locust Hill.  In the Sons of the American Revolution, I travel around with other members dressed in Revolutionary War uniforms serving in Color Guards to honor the graves of Revolutionary War Soldiers.


OK, it appears that I am a "cemetery geek!" for sure.  I do think of the term as a good thing.  Writing this blog, I thought I should check to see what the definition of a cemetery geek might be.  I went to Google to search for the term.  What came up was that news article about me being a cemetery geek... there was no other use of the term except in describing me!!!  I may have coined a new term.  One related to genealogy, at that!  How many of our readers might be able to proudly call themselves "Cemetery Geeks?"  You would not have to be as extreme as me to qualify.  There are at least 3 qualifiers, however.  One you must know that the word "cemetery" does not have an "a" in it and that (two) you must actually go to a cemetery to see all of its glory from time to time.  Three, you must feel strongly about cemetery vandalism as being one of the lowliest things people can do.  Don't be shy or modest, please let me know if you are or want to be a cemetery geek!!!

"What is a Contrail?"

A few days ago, I was outside with an associate who knew I had been in the U.S. Air Force.  A jet was soaring high above us.  I was asked to identify the jet.  Well, all you could see was a white dot with a very long white trail that extended the full length of the sky.  I told my friend that even if I knew something about jets, at this distance, I would not be able to make even a guess.  I further stated that I really did not know much about aircraft.  "What?" he retorted, "you were in the Air Force and do not know anything about jets?"  He was amazed at my seemingly impossible lack of knowledge about things he thought was second nature for anyone in the Air Force.  I explained that I was in Air Weather Service and was trained in high altitude weather data calculations that was used in flight planning and in predicting or forecasting the weather.  I could tell that my friend was impressed that I was connected to weather forecasting.  He immediately asked me what kind of clouds were in the sky.  I told him that I thought they were cumulus clouds, but that they might be stratus clouds... I really was not sure.  Now, I detected that he thought I was not very smart or I was not a very good serviceman.  So, I quickly told him that the long white trail from the jet was called a "contrail" (short for condensation trail) caused by the hot jet engine exhaust hitting the cool atmosphere.  I told him that I was never a weather observer, but, rather, a Rawinsonde Operator who charted data submitted from a transmitter attached to a large helium/hydrogen filled balloon tracked by radar.  He thought that sounded complicated, but important.  It did take special training and was important for flight plans and forecasting weather pattern changes.  Then he said, "so, that long white trail is called a "contrail" created by the warm exhaust hitting the cooler atmosphere!"  I smiled and said "that is correct!"

My friend is like all of us in that we assume certain facts to exist just by association.  I was in the Air Force and he assumed I knew all about jets.  Then, he assumed that my knowledge in Air Weather was that of being a weather observer.  There was no doubt that he was glad I at least knew something interesting about that white trail in the sky and that it is called a "contrail."

This little story might help us when we research, especially genealogical research.  We must be very careful to not just assume certain conclusions based on our perceived absolute truths or experience.  It is easy to assume that Thomas Goldman, Sr. and Thomas Goldman, Jr. of the same geographical area to be father and son... but the true facts are that the use of "senior" and "junior" was a way to tell them apart... one was the older Goldman.  Not only might they not be father and son, they might not even be related!  Or have you heard this one... they are not related to our family because we spell the name "Goldman" not "Gouldmann!"  Of course we all should know that is not always true!!!  Names with variations in spelling are often the result of how others decided how the name should be spelled.

I hope my little "contrail" story will remind you to avoid falling into the trap of assuming things are true when other possibilities may exist.  - JGWest
Posted by TSGS at 2:33 AM No comments: 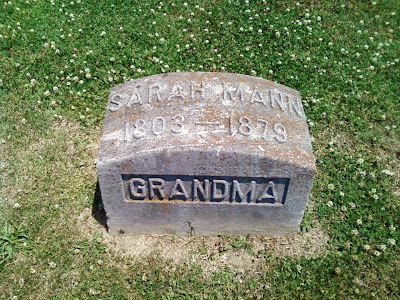 I think placing "Grandma" on this marker is pretty cool!

Don Counts & I as TSGS President & Vice-President and as local chapter & state officers of the Ohio Valley SAR Chapter and the Indiana Society of the Sons of the American Revolution, attended a ground breaking for a large monument in this veteran's cemetery to honor 71 men that provided service to the Revolutionary War.  These men lived or were buried in Christian County.  One of them was my ancestor, Thomas West, Jr.

In the foreground of this photo is the entrance to the cemetery with the tall monument featuring the American Bald Eagle and the large flag of the United States.  The eagle is golden in color and is about 30 feet high.

- Photo taken & submitted by JGWest
Posted by TSGS at 10:12 AM No comments: