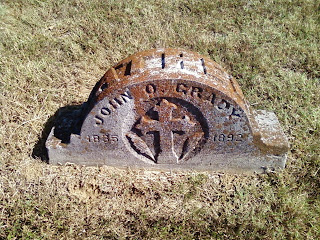 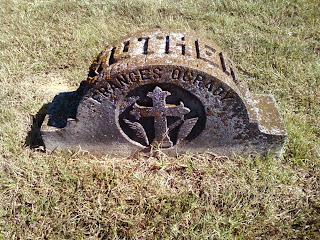 I thought these were somewhat unusual grave markers.
- Photos taken by JGWest
[Tombstone Thursday is dedicated in memory of Donald G. West 1952-2000]
Posted by TSGS at 10:00 AM No comments:

The Tri-State Genealogical Society has decided to cancel the Christmas Social for Tuesday night due to cold & icy weather conditions. Please help spread the word.

Parker County Genealogical Society of Texas
has decided to dissolve after 41 years!

According to the article by Crystal Brown in the 10 Dec 2010 edition of the Weatherford Democrat, leadership of the society decided to disband due to decreasing membership and failing health of of others along with the lack of new, younger researchers joining the group. Many were in their 30's when they started with attendance of 50-60 members at each meeting during their peek years. The membership began declining in the 1980's with only as few as six attending meetings in recent years on Tuesday nights at the library.
- blog from Eastman's Online Genealogy Newsletter for 10 Dec 2010 for the complete newspaper article go to the Weatherford Democrat.

*******************
Unfortunately, this is becoming a trend of genealogical societies folding due to declining memberships and leaders to keep the groups going. The Tri-State Genealogical Society started 41 years ago just like this Texas group. We may have been a little larger than they were, but we are facing the same problems: declining membership, low meeting attendance, active members dropping out because of age or health and a lack of new, younger members joining. TSGS has done several things to attempt to avoid these shortcomings or to at least lessen its impact. Times are changing and in the field of genealogy it is becoming a rapid change! Technology and the Internet is changing everything... the Internet & computers are significant tools for researchers - even the beginners or "newbies" as we have labeled them.

I just sent out comments to about 14 researchers on Ancestry.com that have incorrect data on my ancestors! Two responded thanking me for the correction... I sent them proof for my information in addition to proof that what they had was not correct. Like all of us that research our family histories we assume that if their is enough details, the information must be true; especially, if there are many others with the same exact information! It does not dawn on many of the new "genealogists" that everyone got the same data from the same one person. New and too many experienced researchers take "facts" at face value without questioning its validity. About 10 of the researchers that I sent a message listed a man that died in 1714 as being the father of another man born in 1718. If you do not see what is wrong with that data, you need to attend our genealogical society meetings to become a better detective & researcher.

I got off subject somewhat. The key is that genealogical societies provide a great deal for family historians and each society needs to do whatever it can to stay active.