Wartime has brought us many slogans. World War II was full of slogans to promote the war effort. One of them was “Loose lips sinks ships!” meaning that idle talk could be heard by enemy spies that might result in aiding the enemy. The slogan is still used today for keeping secrets.

Sometimes in our quest to find our ancestors, it seems that there are well-guarded secrets concerning our family histories. And that may be true! Sealed lips about a family member or the events that at one time were deemed to be unfavorable by the rest of the family was not uncommon. So many reasons to keep secrets: births out of wedlock, unfaithful spouses, law breakers, escaping the facts of the past, even the fact that a child was disabled or considered to be an “idiot.” Names were even changed and the family would move great distances to protect the secret! And these “secrets” often impedes our search for our genealogy. Like the WW II slogan warns, family gossips or others will eventually let the “cat out of the bag” (sort of speak) and the secret is known. For some in the family, the truth is undesirable, while others now understand what happened and doors to the past have been opened.

It seems that during war or other serious situations idle talk could lead to destruction or grave consequences, while other situations that same kind of idle talk can lead to learning more about the truth. I have discovered lately that just casual conversation can lead to new discoveries that were never secrets, but, rather, just undisclosed information. I mentioned several of these in a presentation I have given “Research Skills vs. Just Plain Luck!” This July 4th. after the dedication of a memorial to Revolutionary War Patriots and Soldiers in Christian County, KY, many of my cousins and other relations went to eat some Bar-B-Que. Chad Word and his family sat across from me and the conversation got around to the Civil War and one grave marker that was basically “swallowed” by a tree trunk growing around it leaving only the top and base showing. Merril Rogers was a union soldier during the Civil War and Chad was able to replace the marker with a military one. Since, I have a Rogers line in Christian Co., I had to ask where was he from and who does he descend from? The answer was Robert Rogers and Lucretia Dillon... my ancestors, too! In just the last few months, I discovered by the casual mentioning of where some of my ancestors were buried that a friend also had people buried there and that led to this same Robert Rogers & Lucretia Dillon being common ancestors!

Mentioning a cemetery in the past led me to the discovery that some Internet friends were cousins thru common ancestors in Breckinridge Co., KY. And then there was the time, several years ago, a neighbor just two doors over from our house stopped me as I was walking the dog down the block, “come up here on the porch and sit for awhile I have a story to tell you,” he said. Hard to resist a story, right? After the story came idle chat, that led to him complaining about his wife being on the computer too much. He then said that she does some of the work from her job on it and that she helps a lot of people with their research of the Perry County Carters. I didn't know that Donna did genealogy research! Was he talking about Perry Co., IN? Yes, he said, she has a huge database of the Carter family that were early pioneers of Perry Co., IN. My wife has Carter family from Perry County. They were the same Carter family and we soon found the common ancestor and several other family lines, as well.

Idle chat can have some serious consequences in “Love and War” while it can lead to new discoveries in the search of your family history. Is it luck or just fate that these casual conversations can find cousins? Remember as you idly talk, the person behind you may be a foreign spy or may be an unknown cousin! 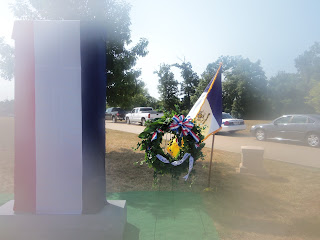 The above photo was the very first picture taken when we arrived for this ceremony that featured 71 men listed on the large monument that is covered with the red, white and blue cloth.  Thomas West, Jr. was one of these men.  Due to the heat, the outer edges came out "foggy" with the center clear providing for a very nice effect.  The wreath was placed here from the Colonel John Green Chapter of NSDAR.  Behind it to the right is the NSSAR flag.

- Photo taken by Indiana Bones.
Posted by TSGS at 4:32 AM No comments: 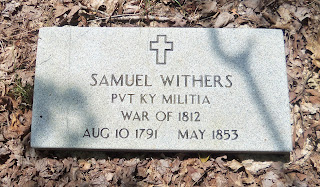 '
Reflecting on this special day...

As Americans celebrate July 4th. with all that traditionally happens on this day, I wonder if we think very much about what this day means to all of us.  It was a day back in 1776, when a group of English Colonist decided to declare independence from England and the King!  It could easily mean death to many of them for being treasonous.  Their families were being put at risk, as well.  This was a bold stand to take with such slogans as: "Give Me Liberty or Death!"  They made signs and even had flags that pictured the rattlesnake with the words: "Don't Tread on Me!" that served as a warning, as well as, a threat.  This had to be a time of complete turmoil for many of our ancestors.  England had a mighty army and navy and, yet, the Colonist took them on!  It would have been just a foolish attempt to rid the Colonies of the unfair controls of the Crown across the ocean, except for the strong resolve of these people.  They risked everything... their lives, their families, their homes - everything they had for freedom.  We have a great nation, today, that was built on this desire to control its own destiny.

This morning, I thought about the life I grew up as a kid with Television that featured shows like the "Andy Griffith Show" with Opie (played by Ron Howard) and Don Knotts, plus so many others.  Times seemed so simple before computers, cell phones and all of our high-tech toys!  A true legend, Andy Griffith, died yesterday at the age of 86.  We will all go on with our busy lives to celebrate today another birthday for the USA... we will need to be careful today with fireworks due to the fire hazards caused by our current drought, but we will have our picnics, parades, family reunions and whatever else we, as American families traditionally do.

This morning I have a unique opportunity to join with others in Hopkinsville, Kentucky to be at the dedication ceremony of the memorial monument erected at Kentucky Veteran's Cemetery West in honor of the men who participated in the American Revolutionary War that were buried in Christian County, Kentucky.  One of my ancestors. Thomas West, Jr., will be listed on the very large 7-foot monolith-style marker.  I will reflect on what he and so many others risked or in many cases gave-up for this nation to exist.  I will also be reminded of my family and my life growing up in a country that we too often take for granted.  I hope everyone will take a little time to think what this day, July the Fourth, means to us all!

- Written by JGWest
Posted by TSGS at 7:48 AM No comments:

"Photos Looking for a Home!"

This is a group of photos, many of which the females named are Swopes and from the Evansville area. There are 33 total cabinet cards. My wish is that they go to family members, whether as a group or individually. Most of the photos are named and I think only about 4 or 5 without identification. 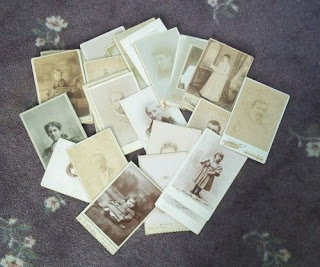 '
[The following was on Dick Eastman's newsletter today http://blog.eogn.com/eastmans_online_genealogy/2012/06/1940-census-project-indexing-is-now-75-percent-complete.html]:


A report Friday by Dennis Brimhall, CEO of Family Search, said the volunteers indexing the 1940 U S Federal Census are well ahead of schedule. More than 137,000 volunteers are creating the indexes, with that number growing by nearly 1,000 indexers a day.