'
[I promised to edit the list of those who attended this reunion if anyone could add to it... thanks to Clint Hadden, Lori Hanes & Ron Emory, we have a number of additional names! - JGW]

Yesterday, was my 65th. Birthday!
I am glad to have made it this far in my journey and I hope to travel a while longer. I hope to enjoy many more adventures along the way!!! For a birthday present, I am posting a photo of the 1988 LONG Family Reunion. You will need to click on this photo to see it a little better.

Right in the middle of this photo with his hands in his pockets wearing a white knit shirt is Mom's brother & my Uncle Norman Long. To the left of him [looking at the photo] in all white is Doris Helen Long who married Frank Stepp... she is Mom's & Uncle Norman's first cousin. Their fathers were brothers - Doris' dad was John Logan Long while Mom & Uncle Norman's father was Byron Allen Long.

To find Mom is a little tricky, but I can use Doris Helen's grandson to help locate her (he was named after Doris' uncle Byron Long). Byron Wallace is the boy knelling to the left of the little boy with the stripped shirt & baseball bat. Looking up of him is a lady with a pink shirt & to her left is Carol Sue [Stepp] Wallace (Byron's mother & Doris Helen's daughter!) wearing a white shirt. Just between these two ladies wearing glasses is my mother Bernadine Long who married Gaither Glennis West (my Dad). Right behind Mom (slightly to the right & in direct line with young Byron Wallace and the lady in pink is my younger brother Donald Gene West. I did not get to go to this reunion... Mom said that Uncle Norman had a great time. It was his only time to attend and he died in May of the next year.

- Compiled by JGWest
Posted by TSGS at 4:12 AM No comments: 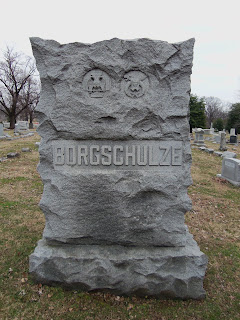 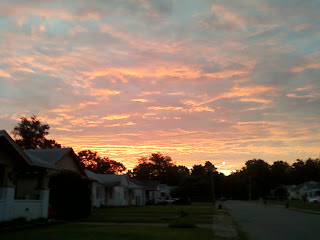 I was walking my dog, Ollie, one morning (17 Aug 2011) down to the end of the block (Kerth Ave.) and could not believe the beauty of the burst of colors coming from this sunrise. I took this with my Samsung camera, which means I went back home at the other end of this block and a half to get the camera. I am looking down Gum Street (Evansville, Indiana) from Kerth Avenue at where Gum Street dead-ends into U.S. Highway 41.

'
Several times in the last week or so, I have asked if anyone could spot what is different or new to the blog page for our society. I got some very good responses, but not anything new... just items not noticed!

If you look just above the date & title for this blog, notice: "Next TSGS Meeting" with date, speaker & topic of program. This is new!!! What is nice about it is simply that it will be near the top of the blogs every day and I can easily change it from month to month or in the event the speaker cancels or changes the program. I can put here that a meeting has been canceled for whatever reason, generally due to bad weather.

Now, if anyone wants to know the date of the next meeting or who is talking about what... it will be there where it can easily be seen without scrolling through looking for the meeting notice blog. I want to point out that if you wanted to see this same info, you can look under the "Blog Archive" or under the "Labels" listed in the left-hand column of this site. And you can always go to the "TSGS Main Deck" on the society's Internet Web Site: http://www.rootsweb.ancestry.com/~intsgs/index.html under "Upcoming Events" about half way down the page.

'
From the old Warrick County Courthouse grounds in Boonville, Indiana 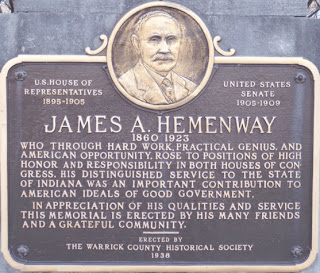 Erected by the Warrick County Historical Society in 1938. Photo from the Official web site of the City of Boonville, Indiana http://www.cityofboonvilleindiana.com/

A Tribute to George Rogers Clark & the Capture of Fort Sackville

'
TSGS President Don Counts & I drove up to Vincennes, Indiana on Saturday 25 Feb 2012 (along with our wives, Betty Counts & Becky West) for Don & I to participate in the 233rd. Anniversary Commemoration of the capture of Fort Sackville. [Click on photos to enlarge images.]

On the morning of 25 Feb 1779, Colonel George Rogers Clark and his small force of frontiersmen received the surrender of Fort Sackville from British Lt. Governor Henry Hamilton. Clark's great triumph at the now site of the George Rogers Clark Memorial in downtown Vincennes, was achieved only after an incredible 18-day midwinter journey through the icy floodwaters of the Illinois country. Above is the bronze statue in the rotunda that stands from the floor 12.5 feet tall, weighing about 12 tons. The exterior of the memorial building is 80 feet tall and 180 feet across at the base. Inside of the rotunda are seven murals, each created on a single piece of Belgium linen 16 feet wide by 28 feet tall. 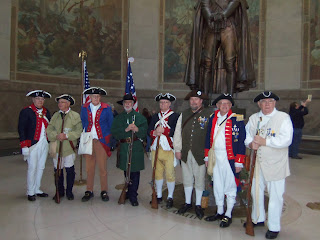 Above is a photo of the Indiana Society Sons of the American Revolution (INSSAR) Color Guard. Representing the Ohio Valley SAR chapter & who are also members of TSGS are (from right): Ken Gilkey, President Don Counts, Vice-President John G. West. 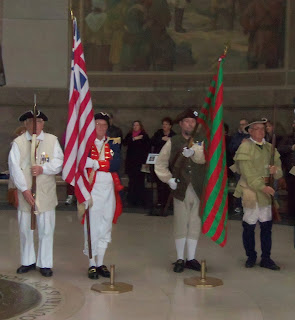 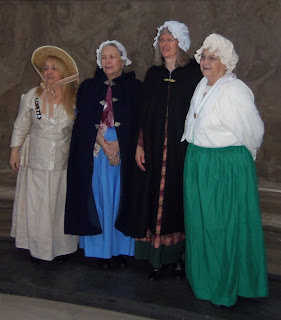 The ladies above attended dressed in Colonial period dress. They are members of the INSSAR Ladies Auxiliary. Two of them are members of TSGS - Peggy Gilkey on the left & Betty Counts on the right. Not pictured was TSGS Program Chair Becky West. 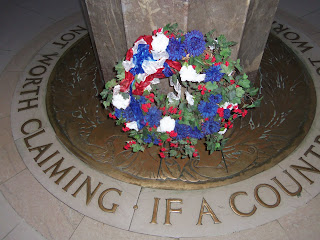 It was a very cold & windy day with snow flurries. Inside it was warm, but the marble benches that circle around the rotunda were very cold! But, the ceremony warmed our hearts and reminded us of what many of our ancestors endured 233 years ago!

- Compiled by JGWest
Posted by TSGS at 7:20 PM No comments: